On any given day, 30 million Americans use a non-steroidal anti-inflammatory drug (NSAID) to treat their pain. Studies show that NSAIDs can reduce pain by about four points on a ten point scale. 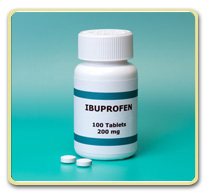 Ibuprofen is part of the NSAID class of drugs, and is the most popular. These common pain meds reduce inflammation by inhibiting a group of “cyclooxengenase” enzymes (abbreviated COX1 and COX2). The COX 2 enzymes are responsible for triggering the immune system to respond to injury. However, it so happens that the COX 1 enzymes protect the stomach lining and enhance blood clotting. So at the same time that most NSAIDs reduce pain and inflammation, they can also increase the risk of ulcers and bleeding. Other potential side effects include increased blood pressure, kidney injury, and ringing in the ears (tinnitus).

This list of side effects may seem worrisome at first, but they are actually not too common if ibuprofen is taken in small amounts for short periods of time. For those without stomach ulcers, kidney or heart disease, or blood clotting issues, NSAIDs have a less than half of one percent chance of causing an unwanted side effect.

For those with a history of gastritis or stomach ulcers, NSAID risk is greatly reduced by taking it in combination with a type of antacid called a “proton pump inhibitor” such as pantoprazole (Protonix) and omeprazole (Prilosec).

When we think about medicine risks, I think it’s important to compare the alternatives.
Acetaminophen has a different side effect profile and can be effective for arthritis pain.  But consider
opioid pain medicines (oxycodone, hydrocodone, codeine, morphine, and tramadol, etc.) – they may be effective for severe, acute pain, but they come with a surprisingly high risk of dependence and addiction. Beyond the risk of severe constipation, nausea, and reduced breathing rate, is the risk of becoming addicted to the medicine. Did you know that 5% of people who are given a prescription for opioid pain medicines become addicted to them long-term, and 10% become addicted if they’re given a second prescription? Dependence on opioids (meaning you experience physical withdrawal symptoms if you stop taking them, and/or need higher doses to control the pain) can begin as early as 3 days after starting them, and an estimated 26% of those who take them engage in “problematic behaviors” afterwards. Opioid overdose is a more common cause of death than automobile accidents in the United States these days!

You also may be surprised to know that NSAIDs such as ibuprofen have been shown to be equally effective in reducing arthritis pain as opioid medications. For chronic pain, opioids have shown to be ineffective.
My opinion is that ibuprofen is a reasonable first line drug for the management of inflammatory pain (from arthritis or an acute injury such as muscle strain, bruise, fracture, or surgical procedure) so long as you don’t have significant stomach, heart, or kidney problems and are not taking a blood thinner (such as Coumadin, Pradaxa, Eliquis, Xaralto). Acetaminophen may be preferable in these cases, though may be less effective. However, the risks are far lower than an opioid medication, and the benefits are fairly similar.

It’s important to know that the risks of bleeding, heart attacks, and kidney injury increase with higher doses or longer term use. Ideally, people should take the lowest effective dose for the shortest amount of time to reap the benefits of pain relief without the unwanted potential side effects. It is estimated that 20% of ibuprofen users exceed the recommended daily dosing, putting themselves at higher risk for side effects. Remember to be realistic about pain control – it is unlikely for pain to be completely removed by any medicine, but a 4 point drop (on the 0-10 scale) is an excellent result.

If you do have health problems, talk to your doctor first before taking NSAIDs. For the average American, ibuprofen’s 0.4% risk of bleeding is a lot better odds than a 26% chance of dependency and a 5-10% chance of long-term drug addiction with an opioid pain medicine!

If you have any questions about Ibuprofen, please log into your account and send
us your question. We are here to help.