Health Tip: Opioid Addiction – Why you should be concerned

You may have heard that there is an opioid crisis in the United States with people becoming addicted to pain killers, overdosing, and dying. Even though the Trump administration has identified the opioid epidemic as a “public health emergency,” a recent public opinion poll suggested that Americans aren’t as concerned as they should be. The public sees opioid addiction as a second tier national problem, and few people (7%) worry that they themselves could become addicted to prescribed pain medication. That being said, opioid overdose is the number one cause of accidental deaths in the United States, outpacing gun-related deaths by more than four times.

What is an “opioid” drug? 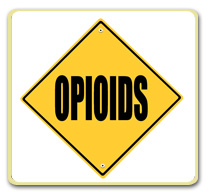 Opioids are a class of drugs that interact with the same receptors on nerve cells in the body and brain. They influence pain perception and can produce feelings of both nausea and euphoria. Drugs in this class vary in strength and potency, from the illegally-produced heroin and opium, to synthetic (and semi-synthetic) prescription drugs including Fentanyl, Demerol, Dilaudid, methadone, oxycodone, hydrocodone, codeine, tramadol, and morphine.

Why are they addictive?
Because they can be effective pain relievers and also have the potential to produce euphoria, they may become addictive. It is estimated that 54 million Americans (more than 20 percent of those aged 12 and older) have used prescription opioids for nonmedical reasons at least once in their lifetime. An estimated 25 million Americans are living with chronic pain conditions (defined as pain every day for at least 3 months).

So we have a perfect storm: millions of Americans in pain, and pain medicines that have euphoric side effects.

The other challenge with opioid medications is that the body habituates to them fairly rapidly, requiring higher doses to produce the same effect (known as drug “tolerance”), and causing unpleasant withdrawal symptoms (such as sweating, agitation, anxiety, muscle aches, insomnia, diarrhea, and vomiting) if they are discontinued too rapidly.

When ceasing an opioid medication produces withdrawal symptoms, the body is considered to be “dependent” on the drug to maintain its homeostasis (i.e. feeling “normal”). Dependency is not addiction, but it can occur as quickly as a day or two after starting a pain medication. So if you take opioid pain medicine, you may well encounter withdrawal symptoms when you taper down to discontinue it. It’s important to recognize this, and resist the urge to treat the symptoms with more opioid. Studies show that the longer you take pain medicine, the more likely you are to become addicted to it.

Among people given enough pain pills for eight days or more, 13.5 percent are still using them a year later. Among those given a month-long prescription, that rate climbs to 30 percent.

What can you do to avoid opioid dependence or abuse?
If you are having surgery or are in severe, acute pain from an accident, opioid medicines may be the most effective way to control the pain. In these cases, it may be difficult to avoid using these medicines to get you through the acute phase of your recovery. Ask your doctor to prescribe these medicines “as needed” instead of scheduled (where the nurse brings you the meds without asking for them), and try to opt out of taking them as much as you can. Use alternative non-opioid medicines if appropriate, including acetaminophen, ibuprofen, and naproxen. Sometimes an ice pack, topical numbing agents, or nerve pain medications can take the edge off your pain without resorting to opioids. Remember that it is unrealistic to expect your pain to be reduced to zero after trauma. Work towards a tolerable pain level instead.

If you have chronic pain, it’s important to do everything you can to avoid reliance on opioids for your pain. Seek out a physiatrist or pain management specialist and review alternative pain management strategies, including physical therapy, massage, meditation, hot and cold treatments, non-steroidal anti-inflammatory drugs, nerve pain medicines, anti-anxiety medications, anti-depressants, and topical numbing agents. If you have been on opioid medications for a long time, it may take time to taper off them to avoid severe withdrawal symptoms. Be patient, but be committed to discontinuing them. There are medicines that can help to treat withdrawal symptoms if they occur, and medications are also available to assist with long taper plans (such as methadone, buprenorphine, and naltrexone).

What makes opioids lethal?
No one dies of withdrawal symptoms, no matter how unpleasant they may be. People die of opioid overdose because at high levels, these drugs have a sedating effect, which suppresses the brain activity that controls breathing rate. It also dampens signals to the diaphragm, which moves to expand or contract the lungs. Opioids also suppress the brain’s ability to monitor and respond to carbon dioxide when it builds up to dangerous levels in the bloodstream. Usually, people pass out and suffocate to death during an opioid overdose.

The most potent opioids are the riskiest for overdose. This is why extremely strong opioids such as Fentanyl are highly regulated, but also abused on the illegal market. Tiny amounts of this opioid can kill.

Conclusion
Opioid medications have a role in acute pain management, but they must be handled with extreme care. Most of us will become tolerant to opioid medications after a few days of use, and many of us will experience withdrawal symptoms when we taper off the medications. Knowing what to expect may be empowering for patients – so that they can avoid the cycle of withdrawal and increasing doses that can spin into dependency, lead to addiction, and put people at risk for overdose and death. When it comes to opioid pain meds, my advice is to use the lowest effective dose, don’t chase withdrawal symptoms with more pain medication, and get off them as quickly as you can. When possible, plan your taper strategy with your doctor before your first dose of opioid.

If you have any questions about opioid addiction, please log into your account and send
us your question. We are here to help.