By Anita Bennett MDApril 30, 2021Health Tips
As we talked about last week, Parkinson’s disease (PD) is a neurodegenerative disease that affects the nerve cells in the brain, primarily the nerve cells that produce dopamine.  We talked about the common symptoms of tremors, slow movements, muscle stiffness, and walking and balance problems.  Today we will talk about the possible complications of PD, how the diagnosis is made, and the treatment options.
What are the complications that can happen with PD? 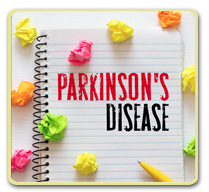 Parkinson’s itself is not fatal but complications of PD can be serious.  They include:
How is Parkinson’s disease diagnosed?
There is no specific test to diagnose PD.  Your doctor will make the diagnosis based on your medical history, your signs and symptoms, and a thorough physical and neurological exam.   Sometimes it takes time to diagnose PD, especially in the early stages.
Your doctor may want to do some tests to rule out other conditions that may cause similar symptoms.  This might include imaging tests of your brain (such as an MRI), or blood tests.
Your doctor may also give you a PD medication to try.  Significant improvement with the medication will confirm your diagnosis.  This doesn’t happen within a day or two though; it does take some time.
How is Parkinson’s disease treated?
Although PD cannot be cured, it can be treated to manage the symptoms.  These treatments include:
Lifestyle changes that can help with PD include:
If you have any questions about Parkinson’s Disease, please log into your account and send
us your question. We are here to help.