The U.S. Preventive Services Task Force (USPSTF) recently recommended new guidelines regarding screening for colon cancer.  The new draft guidelines, which were released in late October, recommend that colorectal cancer screening should start at 45.  Let’s talk about why the USPSTF wants to change the guidelines.

What is the USPSTF? 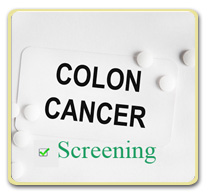 The USPSTF is an independent, volunteer panel of national experts in disease prevention and evidence-based medicine.  The Task Force works to improve the health of all Americans by making recommendations about preventive medical services based on the latest evidence available.  Before any guidelines are changed, the Task Force issues “draft” guidelines and asks for comments from doctors and the general public regarding the recommendations.  Once the comment time period is over, they consider all of the comments, in addition to the latest evidence, and the final guidelines are published.
What are the current guidelines?
Current recommendations are that people should start screening for colorectal cancer at age 50 and continue screening until they are 75.
The recommended new guideline states that people ages 45 to 75 should be screened for colorectal cancer to reduce their risk of dying from this disease.
What is considered a “screening” test as opposed to a diagnostic test related to colorectal cancer?
A screening test is done on people who do not have any symptoms, specifically targeting people who have a higher likelihood of having cancer, often based on age.  Screening recommendations can vary based on family history or other health conditions.
If a person comes in complaining of symptoms that could be caused by colorectal cancer, any test to look for this cancer is considered a diagnostic test, rather than a screening test.
The USPSTF has stressed that the draft recommendations “apply to adults without symptoms and who do not have a personal history of colorectal polyps, or a personal or family history of genetic disorders that increase the risk of colorectal cancer.”
Why does the USPSTF want to change the guidelines?
What if a patient younger than 45 has symptoms that might be due to colorectal cancer?
The proposed screening recommendation change to age 45 applies to screening tests only.  This does not apply to patients who have symptoms.  If a person younger than 45, even a person in their 20s, has persistent rectal bleeding, change in bowel habits, or persistent abdominal or pelvic pain, they should discuss these symptoms with their doctor, specifically discussing further diagnostic work up to determine the cause of their symptoms.
Next week, we will talk more about the symptoms of colorectal cancer that everyone should know, as well as exactly what screening for colorectal cancer involves.
If you have any questions about colorectal screening, please log into your account and send
us your question. We are here to help.