Lyme disease is the most commonly reported tick-borne disease in the U.S. It is caused by a bacteria called Borrelia burgdorferi. The name Lyme disease came from the location in which it was originally identified, Lyme, Connecticut. It can become a very serious infection if not treated, but most cases of Lyme disease can be treated successfully with a few weeks of antibiotics.

How is Lyme disease spread? 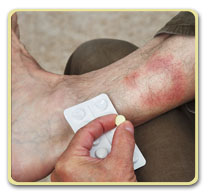 The bacteria that causes Lyme disease, Borrelia burgdorferi, is spread through the bite of infected ticks. Ticks that may be infected include the blacklegged tick (also called deer tick) in the northeastern, mid-Atlantic, and north-central U.S., and the western blacklegged tick on the Pacific Coast.
In most cases, the tick must bite and remain attached for 36-48 hours or more before the bacteria can be transmitted to humans.
Most people are infected through the bites of immature blacklegged ticks, call nymphs, which are tiny and difficult to see. Nymphs feed during the spring and summer months. Adult ticks can transmit Lyme disease, but they are much larger and are more likely to be discovered and removed before they have had time to transmit the bacteria. Adult ticks are most active during the cooler months of the year.
Where is Lyme disease most common?
Lyme disease is most common in the northeastern U.S. down to Virginia and the north-central U.S.
What are the signs and symptoms of untreated Lyme disease?
Lyme disease may evolve through stages, which can sometimes overlap. The first stage includes the first 30 days after the tick bite. It is considered early, localized Lyme disease. Symptoms at this stage can include:
If Lyme disease is not treated, it can progress to cause more severe symptoms, which can include:
How is Lyme disease diagnosed?
If your doctor suspects you may have Lyme disease, a blood test is done to make the diagnosis. Sometimes the test is negative in early disease because your body hasn’t yet made enough antibodies to the bacteria. If your test is negative and your doctor is suspicious of Lyme, they will likely recommend repeating the test after a few weeks.
The antibodies do not go away after you are treated, so the test can be positive for years, even though you no longer have Lyme disease.
How is Lyme disease treated?
Lyme disease is treated with antibiotics. There are several different antibiotics that can be used. The exact treatment regimen recommended can be different depending on the stage of the infection and which body systems are affected.
If you have symptoms concerning for Lyme disease, you should see your doctor for testing and treatment if necessary.
What is chronic Lyme disease?
In the majority of cases, Lyme disease is successfully treated with oral antibiotics. Rarely, patients can sometimes have symptoms of pain, fatigue, or difficulty thinking that last for more than 6 months after they finish treatment. This condition is called Post-Treatment Lyme Disease Syndrome (PTLDS). We don’t know why some patients have these prolonged symptoms. Some experts believe that the infection can trigger an auto-immune response, which can also happen with many other infections.
Although the symptoms may be prolonged, this does not mean that the Lyme bacteria is still present or active. In rigorous controlled studies, patients with PTLDS treated with prolonged antibiotic treatment, including IV antibiotics, showed no benefit when compared with placebo treatment.
The term “chronic Lyme disease” has been used to describe people with different illnesses, some with PTLDS and some of whom have no evidence that they have ever had Lyme disease currently or in the past. For these reasons, experts in the field do not support the use of the term “chronic Lyme disease”.
Many research studies are currently attempting to learn more about PTLDS as well as other conditions that mimic the symptoms of PTLDS without evidence of previous Lyme infection.
For more information about Lyme disease, use this link:
Lyme Disease | Lyme Disease | CDC
If you have any questions about Lyme Disease, please log into your account and send us your question. We are here to help.
Dr. Anita Bennett MD – Health Tip Content Editor