The Lungs: You, Yes YOU, Will Probably Be On A Ventilator At Some Point

Have you ever wondered why a person needs to be on a ventilator? Ok, so maybe you haven’t. Now that you think about it, though, do you know why? Well, it’s usually one of two reasons – either their lungs are damaged and they need help getting air in and out of them, or their nervous system isn’t telling the chest muscles and diaphragm to pull the lungs open and closed – perhaps because the person is unconscious, or has a brain or spinal cord injury. Either way, mechanical ventilation (with a bag-valve-mask or machine) is keeping a whole lot of Americans alive. Just think about how many millions of people use it during general anesthesia. 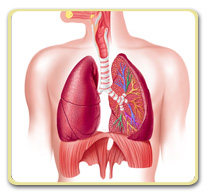 According to the American College of Surgeons, the average American undergoes 3.4 inpatient surgical procedures in their lifetime. Therefore, most of you readers have been (or will be) mechanically ventilated at some point. So let’s discuss how this works.

The lungs are basically fluffy sponges with very elastic scaffolding and a network of delicate blood vessels interwoven throughout its tissue. These sponges are stuck on to the chest wall by suction action between their outermost layer (pleura) and an air-tight fluid layer. If you’ve ever tried to get a flat piece of glass off a wet stone surface, you know the power of that kind of suction.

The lungs are passive. They don’t have the ability to move themselves – they are simply sucked open by the vacuum that is created when muscles pull down and out on their pleura. The largest muscle involved in pulling the lungs open is called the diaphragm, and it spans the entire chest – forming a barrier inside between the chest contents and the abdomen. The diaphragm is triggered to contract by a nerve (called the phrenic nerve) that is stimulated by a part of the brain that doesn’t require conscious thought. For this reason, you go on breathing without having to think about it.

Lungs have air tubes that resemble an upside-down tree. The trunk is the trachea (also known as the “wind pipe”) and it branches into the right and left lungs and then sub-branches into each of the lobes of the lung, and then has tinier branches that interface with microscopic blood vessels. The tree trunk and branches have muscular walls that can expand and contract to some degree. The walls between the very tips of the “tree branches” and the blood vessels are so thin, that gas can pass through them (most importantly oxygen – needed to fuel all the cells in our body – which is constantly being exchanged for carbon dioxide). Once the gas is exchanged in the blood that is pumping through the lungs, it can be expelled back up through the branches and out of the windpipe as the lungs “snap back” when the chest muscles and diaphragm relax.

Knowing how the lungs work helps to explain the problems that can occur to them at various levels. So let’s review the most common lung problems:

The most common lung diseases, and their treatments, will now make perfect sense (I hope):

COPD (chronic obstructive pulmonary disease – which includes emphysema and chronic bronchitis – is almost always caused by smoking). COPD is a combination of three lung issues: problem #1 (mucous and goop in the airways) along with #5 (inflammation causing airway constriction) and #6 (elastic fibers snap with exposure to smoke over time). Treatment includes smoking cessation, anti-inflammatory medications, and puffers that relax the airway muscles. Unfortunately, the elastic fibers cannot be fixed once they are broken. Advanced COPD often causes a cycle of bronchitis due to tiny breaks in the bronchial lining that become regularly invaded by local lung bacteria.

Asthma – asthma is mostly a #5 issue. Treatment includes avoiding asthma triggers and taking medicines that relax (or dilate) those airway muscles. However, inflammation certainly plays a role in asthma, and anti-inflammatories (like leukotriene inhibitors) can be an important part of treatment.

Pulmonary Embolus (this is another word for blood clot in the lungs). This is a #4 issue. Pulmonary emboli almost always start as a leg clot. The clot can break off and travel to the lungs where it gets wedged into a small space and is trapped, cutting off the oxygen supply to the tissue that the vessel supplies. Leg clots should be treated with prescription blood thinners to prevent pulmonary emboli, because once the lung damage is done, it cannot be repaired. Leg clots occur more commonly in people with sedentary lifestyles or obesity. Women on birth control pills and people with clotting disorders or leg injuries are also at higher risk.

Pneumonia is primarily a #1 type of problem. Bacteria, viruses, or sometimes yeast or fungus can grow in lung mucous, causing pus pockets that can get into the blood stream and make a person very sick. People with pneumonia usually feel rotten, have high fevers, and may have difficulty breathing. Antibiotics should be targeted to the kind of infection that is occurring, and people may need to go to the hospital if breathing becomes difficult. Aspiration pneumonia can occur when a person inhales food into the lung. Interestingly, food usually lodges in the right-sided airway because it is a straight shot down from the mouth.

Bronchitis is primarily a #1 type of problem. Bronchitis refers to an infection of the higher parts of the airway – usually the tree trunk or first branches. It is not usually as serious as pneumonia, and can be treated with antibiotics and anti-inflammatory medications if necessary.

Pulmonary Fibrosis is a #6 type of problem. There are some lung diseases that cause a hardening of the lungs by scar tissue formation. Diseases such as sarcoidosis affect the elasticity of the lungs, making them stiff and hard to aerate.

Lung Cancer is a mix of #1 and sometimes 2 or 4. The most common symptom of lung cancer is coughing up blood. The cancer cells destroy the healthy lung tissue around them and can break the delicate blood vessels or block the air pipes. Depending on where the cancer is located, it may also break into the pleural space and cause a collapsed lung, though this is quite rare.

Pulmonary Edema this is a type 1 and 4 issue. When the heart is not pumping blood effectively, or the blood can’t get through the lung because of tissue damage, pressure builds up and the blood vessels leak the fluid portion of the blood into the surrounding area. The lungs become swollen with watery fluid. This is most commonly caused by congestive heart failure.

Although you probably don’t spend much time thinking about your lungs, they are an amazing and important part of your body. Luckily, we have developed a lot of strategies to keep them working – from mechanical ventilation, to anti-inflammatory meds, antibiotics and muscle relaxants, to surgical procedures, blood thinners and even lung transplants. But the most important thing you can do for lung health is to quit smoking, because once those fluffy sponges lose their bounce, we still don’t have a way to get it back.

If you have any questions about lungs, please log into your account and send
us your question. We are here to help.