Is Chicken Soup Really Good for a Cold?

By Anita Bennett MDApril 2, 2021Health Tips
How many times has someone told you that you should eat chicken soup when you are sick?  Your grandmother or mother perhaps?  My mother is certainly a believer.  Chicken soup has been praised for its healing qualities for centuries.  It turns out that chicken soup really does have properties that would be considered medicinal. 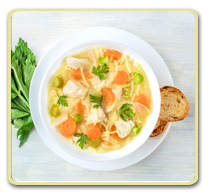 How does chicken soup help with a cold?
Researchers have carefully studied the ingredients found in chicken soup and have identified several that are responsible for its medicinal qualities.
Anti-inflammatory properties –
As chicken soup cooks, the meat and bones of the chicken release an amino acid into the broth, which can reduce the inflammatory compounds responsible for the symptoms that we associate with a cold or the flu.
Immune boosting properties –
Chicken soup usually includes an array of vegetables cooked into the broth.  Vegetables such as onion, parsnips, celery, carrots, and garlic, as well as some herbs, such as oregano, contain phytonutrients, vitamins, and minerals, which boost immunity.  You might say these phytonutrients can “talk” to our immune system.  Chicken soup is also high in protein, which also improves immune system function.
Mucolytic properties –
Something that is mucolytic can cut through or thin out mucous.  The mucolytic effect of chicken soup is due to another amino acid, which is released from the meat and bones of the chicken as it cooks.  This results in thinner mucous that is easier for your bronchial tubes to transport out of your chest and easier to drain from the sinuses.
Hydrating properties –
Staying well hydrated by increasing your fluid intake during a respiratory infection also helps relieve cold symptoms.  The broth of chicken soup is ideal for hydration.
Warming properties –
The warm liquid in your throat can also cut through mucous and wash it down into your stomach where it is broken down.  In addition, breathing in the steam from the bowl also has a warming effect on your nasal passages, which helps open and drain your sinuses.
Decongestant properties –
If you add a little bit of hot pepper or red chile flakes to the soup, this can also help to open your sinuses temporarily, allowing you to breathe easier and help sinuses to drain adequately.  Make sure you are up for the heat of this added pepper before adding it to your soup.  If you can’t take the heat, you might miss out on all of the other benefits!
Homemade versus store-bought chicken soup
There is a wide variety of store brands of chicken soup.  Researchers have found some to be much higher in beneficial qualities than others.  Many store-bought brands use meat “flavors” that are produced in a lab, rather than real chicken.  Read labels carefully to look for real ingredients.
Homemade chicken soup is easier to make than you might think.  It doesn’t take much in the way of cooking skills!  When making chicken soup at home, be sure to use chicken with bones, rather than boneless chicken.  It will not only contain more great nutrients; it will taste better too.  Simply remove the bones once the soup has cooked.  You can also make chicken soup, then freeze it in small portions for another time, which is a great way to have it on hand just in case you need it.
If you have any questions about the healing properties of chicken soup, please log into your account and send
us your question. We are here to help.