June is Alzheimer’s and Brain Awareness Month. I thought we could start our series on this subject this week by talking about dementia in general. Next week we will talk more about the most common type of dementia, which is Alzheimer’s disease.

Dementia refers to a group of symptoms related to a decline in memory, thinking, and social abilities. The term dementia applies when these symptoms are severe enough to interfere with your daily life. It is not simply memory loss, although that can be one of the early signs of dementia. Dementia does not refer to a specific disease. There are several diseases that can cause dementia. 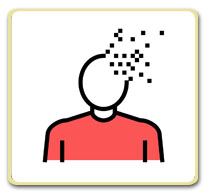 What are the symptoms of dementia?

Symptoms can be broken down into 2 categories.

Cognitive changes, those related to the mental processes of perception, memory, judgement, and reasoning can include:

Psychological changes, those relating to emotions, awareness, feeling, or motivation can include:

What is the difference between dementia and delirium?

Dementia is a chronic process that usually comes on gradually and is progressive. Delirium is a state much like dementia, with confusion, memory loss, personality changes, etc., which develops over a shorter period of time, often caused by an acute illness or infection, as a side effect of a medication, or even as a result of severe sleep deprivation. Delirium is reversible if the underlying cause is treated appropriately.

What are the different causes of dementia?

Diseases that cause a primary progressive dementia include:

Diseases that may cause dementia as a secondary feature of the underlying disease include:

As we continue the series, we will discuss Alzheimer’s disease in more depth, as well as talking more about the risk factors for dementia and how you might be able to decrease your risk of developing dementia.

If you have any questions about Dementia, please log into your account and send
us your question. We are here to help.