Last week, we talked about dementia in a general sense. Today, we will focus on the most common cause of dementia, which is Alzheimer’s disease. About 5.8 million people in the US age 65 and older are living with this progressively worsening dementia.

Scientific researchers believe that for most people, Alzheimer’s disease is caused by a combination of factors, including genetic, environmental, and lifestyle factors, which affect the brain over time. 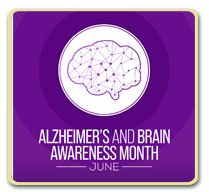 How does Alzheimer’s disease cause dementia?

People with Alzheimer’s disease have 2 types of abnormal deposits in their brains, plaques and tangles. Plaques are made up of clumps of a protein called beta-amyloid.

Tangles consist of fibers of a protein called tau protein. Tau proteins are important for normal function of nerve cells including helping facilitate transport of nutrients. But for a reason that we don’t yet understand, in Alzheimer’s disease, the tau proteins change shape and become grouped together into multiple tangled structures.

These deposits of plaques and tangles damage nerve cells and the connections between them, eventually causing nerve cells to die.

What are the symptoms of Alzheimer’s disease?

Like the symptoms of dementia in general, which we discussed last week, symptoms of Alzheimer’s disease include:

Some skills can remain intact for much longer because they are controlled by parts of the brain that are affected later in the course of the disease. These can include:

How is Alzheimer’s disease diagnosed?

There are several things that doctors use to make a diagnosis of Alzheimer’s disease.

How is Alzheimer’s disease treated?

There are several drugs that may be used to treat the symptoms of Alzheimer’s disease which may slow the declining function for some patients or help to improve behavioral symptoms.

About a year ago, the FDA approved a new drug, which is supposed to target and remove amyloid plaques from the brain. The research shows promise but the approval was given on the condition that further studies be conducted to confirm the benefit of the drug.

What are some important things to know when caring for a person with Alzheimer’s disease?

Besides drugs, an important part of caring for a patient with Alzheimer’s disease includes making sure they are in a safe and supportive environment. Here are some things you can do:

Next week, we will wrap up our series with information about risk factors for dementia and how you might decrease your risk of developing dementia.

If you have any questions about dementia, please log into your account and send
us your question. We are here to help.