Brisk Walking is Good for Your Brain

By Anita Bennett MDSeptember 17, 2021Health Tips
You probably have a family member or friend who has had some memory problems as they have gotten older, or maybe someone with serious dementia.  I’m sure many of us are a little scared of developing memory problems or dementia when we got older.  It can be a scary thing to think about.  A recent study gives us something we can do to improve our odds.
What is mild cognitive impairment? 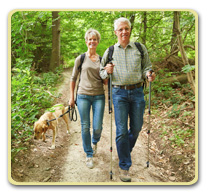 Most of us, as we get older, will have a little trouble remembering things.  This is considered normal, although it certainly is annoying.  If the memory loss worsens, it may become what is known as mild cognitive impairment (MCI).  MCI is a medical condition in which the loss of thinking skills and memory grows obvious enough that it becomes worrisome to you and others around you.  MCI is not dementia, but people with MCI are at a higher risk of developing Alzheimer’s disease later in life.
What causes mild cognitive impairment?
Scientists have not yet been able to pinpoint the exact underlying cause of MCI.  But there is evidence that changes in the blood flow to the brain is a contributing factor.  That blood flow is responsible for bringing oxygen and nutrients to the brain.  If the flow of oxygen and nutrients slows down, this can lead to damage to or even death of brain cells.
Most people do experience some decline in the flow of blood to their brains as they get older.  This is due to a combination of things, which can include blockages in the arteries, stiffness of the arterial walls, or weakness of the heart.
What can we do about it?
The simple answer is exercise.  Now let me get into the details about the studies and what exercise can do for you.
Past research studies have shown that the brains of physically active older men had much better blood saturation than the brains of men who were sedentary, even when everyone was quietly resting.  They have also found that people who exercise had better scores on tests of memory and thinking skills than sedentary people did.  But these studies focused primarily on people with relatively normal brain function at baseline.  Exercise strengthened their reasonably sound baseline function.
The latest study, published in March 2021 in the Journal of Alzheimer’s Disease, started with people who had already been diagnosed with mild cognitive impairment.  They studied men and women aged 55 and older with a diagnosis of MCI and asked them to start moving more.  They first did baseline testing of the cognitive function, aerobic fitness, and general health.  They measured the stiffness of their carotid arteries and the amount of blood flowing to and through their brains.
They then divided them into two groups.  One group started a program of light stretching and toning exercises, to serve as the active control group.  The other participants started a program of aerobic exercise, walking briskly on treadmills at the lab.
As you would expect, after 12 months, the group that was doing aerobic exercise was found to be more fit, with higher aerobic capacity.
The brisk walking group also showed much less stiffness in the carotid arteries, with greater blood flow to and throughout their brains.  They also performed significantly better than the stretch and tone group on tests of their thinking skills involving planning and decision-making.  These skills tend to be the first to decline in patients developing dementia.
Both groups had raised their scores slightly on most tests of memory and thinking to about the same extent.  This would indicate that being more active in any way appeared to have improved thinking skills and helped keep those skills from declining.
We should look at this as a gentle reminder that moving your body is good for your brain.  You should take every opportunity to move your body more.  Take the stairs instead of the elevator or escalator.  Park further away when you go shopping.  Make sure you are increasing your heart rate when you exercise.  These small things may protect your memory and thinking skills over your lifetime.  This will help you to remain independent throughout your life.
Please consult with your doctor before starting an exercise program.
If you have any questions about exercise for brain health, please log into your account and send
us your question. We are here to help.