Could this skin lesion be cancerous? Part 1 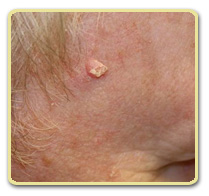 Squamous cell skin cancers (SCC) arise from squamous cells which comprise most of skin’s outer layer (epidermis).  Since these are often related to UV exposure from the sun, they most commonly develop on the face, ears, arms or hands.  In their earliest form, they often appear as rough, scaly, red patches.  Unlike a skin rash that may fade with time, however, these rough patches persist and continue to progress slowly. Over time, they may become crusted, bleed, or develop an indentation in the center of the lesion. On occasion a SCC may have a wart-like appearance.

Approximately 40 to 60% of squamous cell skin cancers begin as a pre-malignant lesion known as an actinic keratosis (AK). Also known as solar keratosis, these develop on su

n-exposed areas of the body such as the face, arms, backs of hands, and lips. An AK is usually rough in texture, resembling a wart, and may be felt before actual changes of the skin are noted. Their color can range from flesh-toned to brown or red. Most are small, less than a half inch across. Approximately 10% of AKs progress to become squamous cell skin cancer. 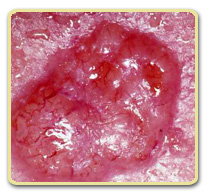 Basal cell carcinoma (BCC) develops in the basal cell layer of the skin, the deepest layer of the epidermis. It is the most common type of skin cancer occurring in the U.S.  BCCs are usually seen in areas of the body that have been exposed to the sun, such as the face or arms. Warning signs that should alert someone to the possibility of a BCC include: 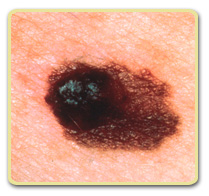 Melanoma is a cancer of the pigment producing cells (melanocytes) of the skin. The great majority of melanomas can be attributed to exposure to ultraviolet (UV) radiation from the sun.  Melanoma begins on the surface of the skin but over time can extend deeper and in some cases, even spread throughout the body. Signs indicating that a skin lesion could be a melanoma include new pigmented area on the skin, or a change in size, shape or color of an existing mole. The ABCDE rule is another way to recognize melanomas:

Regular examination of the skin, by a physician or by self-examination, is the key to identifying skin cancers in their earliest stages.  Any suspicious lesion should be brought to the attention of your primary care doctor or a dermatologist. Next week we’ll look at how these common forms of skin cancer are treated and learn the best ways of preventing skin cancer.

If you have any questions about skin cancer, please log into your account and send
us your question. We are here to help.