Why do I stay (hot/cold) all the time?

Many people feel uncomfortable at either end of the temperature range. In most cases, this is due to a normal variation in comfort levels at various temperatures and is no cause for concern. An extreme intolerance to heat or cold, however, may signal the presence of a condition that deserves medical attention.

Heat Intolerance. People commonly complain about the heat, but someone with heat intolerance finds it almost impossible to stay comfortable when the temperature rises. Heat intolerance occurs when the body’s mechanisms for reducing heat—sweating and increasing blood flow to the skin—are impaired. Some of the potential causes for heat intolerance are: 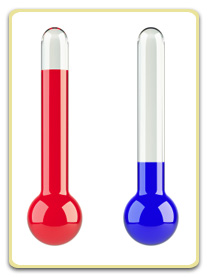 In most cases, addressing the underlying cause for heat intolerance will alleviate the problem. Changing medications to one less likely to cause heat intolerance or reducing caffeine consumption will help restore heat dissipating mechanisms. Hyperthyroidism can be addressed by treatment with radioactive iodine to destroy a portion of the thyroid gland, medications to reduce thyroxin production, or surgery. In the case of menopause, estrogen replacement therapy or waiting until estrogen levels have stabilized helps with heat intolerance symptoms.

Other illnesses that have been linked to cold intolerance include fibromyalgia, depression, and sleep deprivation. Since cold intolerance is not a disease but a symptom of an underlying medical condition, treatment hinges on managing that condition. In the case of an anemia cause by insufficient iron consumption, taking supplemental iron will restore blood production with improvement of cold intolerance. Hypothyroidism is usually treated with life-long administration of thyroid hormone replacements. By taking hormone replacements, most people with Addison’s disease are able to lead normal lives.