What’s so bad about sugary drinks?

Sugar-sweetened beverages (SSBs) are those that contain added caloric sweeteners such as sucrose, high-fructose corn syrup, or fruit-juice concentrates. They include soft drinks, fruit drinks, sports drinks, sweetened iced tea, and lemonade. Findings from multiple scientific studies show a positive association between greater intakes of sugar sweetened beverages and weight gain in both children and adults. They may also increase risk of developing Type 2 diabetes mellitus and cardiovascular disease.

And the problem doesn’t lie with SSBs alone. Quick, can you tell which has more sugar, a glass of cranberry juice or a cup of coffee with 2 packets of sugar? If you guessed the coffee, you’d be wrong since the cranberry juice has over 5 times as much sugar! The amount of sugar reported in 12 ounces of other popular drinks may surprise you too. In some cases, the beverages listed below are sweetened with added sugars, in other instances, as with orange juice, the beverage is naturally high in sugar: 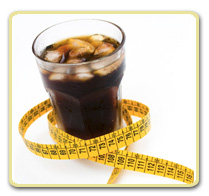 What is the significance of all this? As mentioned previously, there is a strong relationship between the consumption of sugary drinks and the development of obesity, type 2 diabetes, and heart disease. Let’s look at the connection between sugary drinks and these conditions further.

Obesity: The rising consumption of SSBs in the U.S. is a major contributor to the obesity epidemic. These beverages add calories to the diet without providing a significant amount of nutrients. Drinking a single sugar-sweetened soft drink per day could add up to 55,000 calories over the course of a year. If this added caloric load is not accompanied by an equal amount of energy expenditure through activity or exercise, it does little but contribute to weight gain. At approximately 100 calories burned per mile of walking, this would mean that you would have to walk an additional 550 miles over the course of a year to prevent these calories from being converted to fat.

Diabetes: Several studies have shown that SSBs contribute to the development of type 2 diabetes. The reason for this is not due to sugar itself, but rather to the weight gain from excessive calories in these drinks. A study involving over 90,000 female nurses found that drinking one or more servings a day of sugar-sweetened beverages resulting in a doubling of the likelihood for developing Type 2 diabetes.

Heart Disease:: Obesity and diabetes are well known risk factors for the development of heart disease. Since sugary drinks can contribute to the development of both of these, it stands to reason that heart disease risk would increase also. In fact, a study that followed over 40,000 men over 20 years found that those who drank one can of a sugary beverage per day had a 20% higher risk of having a heart attack or dying from a heart attack than men who rarely consumed sugary drinks. A similar association between the consumption of SSBs and heart disease was noted in the study of female nurses mentioned previously. In addition to the excess calories from sugar drinks, there is also concern that the high glycemic load and inflammatory factors associated with these beverages may contribute to the higher risk of heart disease.

The good news is that studies have also demonstrated that reducing sugary drink consumption can lead to better weight control among those who are overweight. By addressing obesity, the risks for developing diabetes and heart disease will go down also. While meeting constitutional opposition, efforts to reduce “supersizing” of soft drinks in New York State is an attempt to decrease the number of empty calories from SSBs. New labeling practices indicating the amount of exercise necessary to “burn” excess calories from sugary drinks is another way to encourage healthier beverage choices.