There is no question but that an epidemic of influenza will occur during the 2016-2017 “flu season”.  What is not known is when this epidemic will happen, the specific strains of flu virus responsible for illness, or the number or severity of cases of flu that will occur.  For that reason, the Advisory Committee on Immunization Practices (ACIP) recommends that everyone 6 months and older receive the flu vaccine. 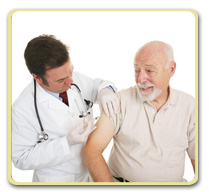 Every year certain things change regarding influenza immunization.  Important aspects of this year’s recommendations from the ACIP Include:

It is impossible to predict whether this year’s vaccine will be a good match with the viruses that are ultimately found to be responsible for causing flu this season. Experts have to make an educated guess as to the strains that are likely to be responsible and make sure that the vaccine includes protection against these strains. Even if the match isn’t ideal, however, the antibodies made in response to vaccination against one type of flu virus often provide protection against other flu viruses.  Overall the 2015-2016 season was relatively mild, but don’t let that lead to complacency regarding getting your flu shot.  While not 100% protective, it is still the most effective way to reduce one’s risk of contracting influenza.

Source for article:
Influenza (Flu) from the Centers for Disease Control and Prevention