What’s the difference between heart attack and heart failure?

The terms heart attack and heart failure are often confused.  While there is some overlap in both their symptoms and underlying cause, they are really two distinct entities.

Heart attack
A heart attack occurs when the flow of
blood to an area of the heart is blocked.  Without a supply of oxygen-rich blood, the heart muscle dies.  Also known as myocardial infarction or MI, the Centers for Disease Control reports that 735,000 Americans experience heart attacks each year. 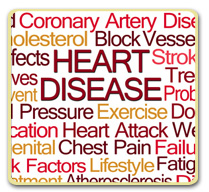 Most heart attacks develop in conjunction with coronary artery disease (CAD).  In CAD, a substance known as plaque gradually builds up in the arteries that supply the heart.  This disease process is known as atherosclerosis.  The combination of plaque formation along with a blood clot is the typical reason for blockage of the coronary artery causing the heart attack.

Prior to the complete blockage of a coronary artery, most people with narrowed coronary arteries will experience a symptom known as angina.  Angina occurs when the heart muscle is not being supplied with enough oxygen. It is usually described as a pressure or squeezing discomfort in the chest. This discomfort can also be felt in the arms (usually left), neck, or jaw.   Usually, this pain goes away with rest or after taking a medication to help improve blood flow to the heart muscle.

With complete blockage and death of the heart muscle (he
art attack) more severe symptoms typically occur. These symptoms include:

A heart attack is a medical emergency causing over 370,000 deaths in the U.S. each year.

When the term “failure” is applied to specific organs, e.g. kidney failure, liver failure, heart failure, etc., it conjures up thoughts of a final or terminal phase in the function of the organ.  In the case of heart failure, however, it does not mean that the heart has stopped working altogether; instead, it means that the heart’s pumping power is weaker than normal. To compensate, the main pumping chambers of the heart (ventricles) become larger and the heart muscle thickens in order to maintain normal blood flow to the body. According to the American Heart Association, around 7.5 million Americans have some degree of heart failure which is one of the most common reasons for hospitalization among those over the age of 65.

One of the most common symptoms of heart failure is the buildup of fluid in various parts of the body. When this occurs, it is called congestive heart failure (CHF).   Symptoms of CHF vary, depending on whether the left or right chamber of the heart is primarily involved. With left sided heart failure, blood and fluid back up into the lungs causing shortness of breath, difficulty breathing when lying flat, and fatigue. With predominant right sided failure, blood and fluid back up causing swelling in the abdomen (ascites) and in the legs and feet (edema).

The most common reasons for developing heart failure include:

In most instances, a heart attack is a life-threatening condition requiring emergency medical treatment. Likewise, when heart failure results from an acute event, such as a heart attack, immediate treatment is usually required.  More often, however,  heart failure, such as when it occurs in association with chronic hypertension, becomes more of a chronic, long-term condition.

If you have any questions about heart health, please log into your account and send
us your question. We are here to help.