What to Do If You Have the Flu

Flu season is in full swing this year, with thousands of Americans suffering from its symptoms. The Centers for Disease Control (CDC) has estimated that an average of 36,000 people in the U.S. die from influenza or from its complications each year. Influenza is particularly hard on the elderly, people with a weakened immune system, children, and those with chronic illnesses, such as emphysema and diabetes. 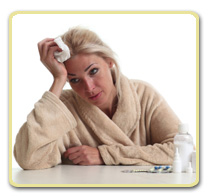 Several weeks ago, a Health Tip went out encouraging everyone 6 months or older to receive the flu immunization. As expected, most of this year’s flu cases have occurred in those who were not vaccinated. Unfortunately, getting a flu shot does not guarantee that you will not get the flu. While immunization remains the most effective way of preventing the flu, recent statistics from the CDC indicates that the effectiveness of the vaccine this year is 62%. This means that if you received the vaccine you are about 60 percent less likely to get the flu, but not completely immune.

How do you know if you have the flu? Mild cases of the flu can be similar to a common cold, but typically, the flu is much more severe. Muscle aches, severe fatigue, cough and headache predominate over common cold symptoms of runny nose and sore throat. Characteristic of the flu also is fever (100-102 degrees F) that can last for three to four days. Of particular concern in those who contract the flu are its complications, including bronchitis and pneumonia, which are responsible for the majority of flu-related hospitalizations and deaths.

What you can do for the flu? Most people with the flu end up being miserable for a few days, but recover on their own. A number of non-prescription medications, while not treatments for the virus itself, can help with flu symptoms. Over-the-counter medications and self-care measures include:

It is important that aspirin be avoided in anyone under the age of 18 with the flu because of its association with Reye syndrome, a condition affecting the nervous system and liver. In most people, medical attention or antiviral drugs are generally not required.

When should someone seek medical attention? People at increased risk of serious flu-related complications, including young children, elderly persons, pregnant women and people with chronic illnesses, such as diabetes, should contact their medical provider with the first signs of an influenza infection. Emergency warning signs in children include difficulty breathing, bluish skin color, extreme irritability, inability to keep food or liquids down, and high fever. Adults with shortness of breath, confusion, chest or abdominal pain, and persistent vomiting should receive urgent medical care. Someone in whom flu symptoms improve initially but later develop worsening cough and fever may have a bacterial infection and should receive medical attention.

What is the doctor able to do? Antiviral medications are modestly effective in shortening the duration of the flu and may help to avoid complications. For these to work effectively, however, it is important to start treatment within 48 hours of the development of symptoms. Below are antiviral medications approved for treating adults and children one year and older:

In December 2012, the U.S. Food and Drug Administration expanded the approved use of oseltamivir for treating children between the ages of 2 weeks to one year. Antibiotics used for bacterial infections, such as Ampicillin, Keflex, Cipro, etc., are not used to treat uncomplicated cases of the flu. These may be required, however, with certain flu-related complications, such as pneumonia or ear infections.

When can I return to work or school? The Centers for Disease Control recommends that people recovering from the flu stay at home for at least 24 hours after their fever is gone. While at home, flu victims should avoid contact with others in the household to keep them from getting sick. Also, frequent hand washing will help to keep from infecting others.