What is Listeria and who is at risk?

Listeria monocytogenes, or Listeria for short, is a bacterium that causes an infection called listeriosis. A recent outbreak of listeriosis, found to be due to contaminated cantaloupe, has placed Listeria in the news. Today’s Health Tip describes the features of Listeria infections and discusses who is at particular risk for developing listeriosis.

How does someone contract listeriosis? Listeria bacteria are found in soil and surface water, as well as in animals and humans who do not appear to be infected. Food can become contaminated when it is handled by an asymptomatic carrier or if it comes in contact with Listeria bacteria in fertilizer or animal waste. The great majority of people who develop listeroisis get it through contaminated foods. Foods that have most commonly been associated with Listeria contamination include processed meats (hot dogs, deli meats, etc.), cheeses (particularly those made with non-pasteurized milk), raw milk, and smoked seafood. Thus far, contamination of fresh produce has been uncommon. Infections that occur in pregnant women are particularly troubling since they can lead to miscarriage, stillbirth, premature delivery, or life-threatening infection of the newborn.

What are the symptoms of listeriosis? Most people that are infected have few or no symptoms. When symptoms are present, they are usually flu-like in nature, including fever, muscle aches, nausea and/or diarrhea. In severe instances, nervous system involvement including meningitis and brain abscesses can occur.

Who is at risk for developing listeriosis? In the United States, an estimated 1,600 persons become seriously ill with listeriosis each year. Some groups of people are at higher risk of becoming infected and developing complications than others. Those at increased risk include:

How is listeriosis diagnosed? The diagnosis is often suspected based on typical symptoms occurring during a Listeria outbreak. With the first cases of an outbreak, or when the diagnosis is uncertain, culturing the bacteria from the subject’s blood or spinal fluid can be performed.

How can you reduce your risk for listeriosis? The Centers for Disease Control has offered the following suggestions for reducing your risk of developing listeriosis:

Persons at high risk, such as pregnant women and those with weakened immune systems, need to take additional precautions. These include avoiding soft cheeses (brie, feta, blue, etc.) unless made with pasteurized milk, refrigerated smoked seafood (which may be labeled as “nova-style,” “lox,” “kippered,” “smoked,” or “jerky), and refrigerated pâté or meat spreads from a deli or from the refrigerated section of a store. For more recommendations on keeping food safe, following this link to the CDC website. 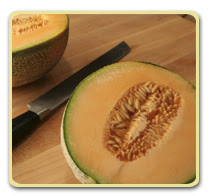 What should you do if you’ve eaten food that could have been contaminated with Listeria? Even if the food contained Listeria, the risk of developing listeriosis is very small. No tests or treatment is necessary if symptoms do not occur after eating food suspected of being contaminated. If the person is in a high-risk group, the CDC recommends seeking medical attention if fever or signs of listeriosis develop within two months of eating the food.

Can Listeriosis be treated? In healthy individuals, Listeria bacteria are cleared by the body in about a week without requiring specific treatment. For high-risk patients with symptoms, antibiotics delivered through an intravenous line, are usually required. Ampicillin and Bactrim (trimethoprim-sulfamethoxazole) are two of the antibiotics that are typically used. Treatment with antibiotics is particularly important in pregnant women due to the risk to the fetus.

The recent outbreak of listeriosis tied to contaminated cantaloupe from Colorado has sickened a number of people and has even claimed lives. Fortunately, the source of the contamination appears to have been identified and new cases related to this outbreak are on the decline.