The first vaccine was developed by Edward Jenner in 1796 as a means of preventing smallpox. Currently, vaccines to protect us from around 27 diseases are available in the U.S., with more under development. Immunization is the process in which vaccines are administered to help develop resistance or immunity to disease.  In the medical community, immunization is generally considered to be one of the most important disease-preventing measures ever developed. Misunderstanding of how vaccines work and concern regarding their potential side effects, however, remains common among the public. 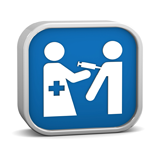 Fallacies concerning the use of vaccines—Despite overwhelming evidence to the contrary, many misunderstandings regarding vaccines persist.  Examples of these include:

Additionally, some people oppose mandatory vaccination believing that it is an infringement on their personal liberties.

How the Immune System works Vaccines work in cooperation with the immune system.  In order to understand how they work, it helps to learn a little bit about normal immune system function. The immune system is a collection of organs (spleen, lymph nodes, etc.), special cells (B-lymphocytes, T-lymphocytes, macrophages, etc.), and substances (antibodies) that help protect us from infections and some other diseases. When germs (e.g. viruses, bacteria, fungi) invade the body and cause an infection, the immune system swings into action. Important steps in this process are:

Following the infection, lymphocytes (B cells and T cells) maintain an antigen-specific memory for the invading microorganism so that they can attack it even more efficiently the next time that it is encountered. That is why many infections, such as chickenpox, occur only once.  Having had the infection, the body maintains an early surveillance system to prevent the same organism from causing a second infection.

How vaccines work— Immunization involves administering a vaccine, either by injection, orally or by aerosol in order to produce immunity.  Vaccines are produced by killing or weakening a disease-producing germ.  Examples of some of the best known diseases for which effective vaccines are available include polio, influenza, Hepatitis B, and pertussis (whooping cough).  When vaccines are administered to someone who has not been exposed to the germ, they produce immunity by simulating an infection. Even though the vaccine is incapable of causing disease, it contains the same antigen as the disease-causing germ. This stimulates an immune response in the body just like when the immune system fought off a real infection.  As a part of the immune response, the body is left with “memory” lymphocytes that remember how to fight the infection should actual exposure to the germ occur in the future.

In part two of this series on vaccines, we’ll look at the effect that immunizations have had on our health.