The Decision to Decline Immunizations

Today’s Health Tip originally ran in 2012 following the release of a statement from the Centers for Disease Control (CDC) regarding the responsibilities of parents who decline to have their children immunized.  The importance of this statement has been underscored by the recent outbreak of measles linked to an amusement park in California. Not surprisingly, a majority of those infected with measles had not received the vaccine.  With an increase in preventable cases of illness including measles and pertussis (Whooping Cough) this information deserves a second look. 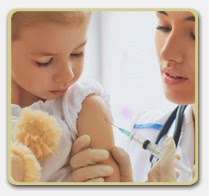 The decision to postpone or decline childhood immunizations has important implications for the child, his or her family, and others in the community.  Recently, the Centers for Disease Control, along with the American Academy of Family Physicians and American Academy of Pediatrics, released a statement outlining the responsibilities of parents who decline to have their child vaccinated.  Today’s Health Tip summarizes some of the most important points from that statement.

Special considerations when an unimmunized child gets sick:  When seeking medical attention for a sick child, it is essential that the health care profession learn of the child’s vaccination status.  This applies whether the child is seen in the doctor’s office, an emergency department, or if the child is traveling in an ambulance. This is because vaccine-preventable diseases will need to be considered as a possible cause for the child’s illness.  Also, the child may need to be isolated to avoid spreading the disease to others. For example, an infant who is not yet old enough to be vaccinated or someone with a weakened immune system could be at risk of contracting the child’s illness.

When an unimmunized child is exposed to a vaccine-preventable disease:  In this situation, the caregivers of the unimmunized child need to know the signs and symptoms of that disease. Medical attention should be sought at the first sign that the child has contracted the disease.  In some cases, a medication may be available to treat the illness, such as the use of an anti-viral medication following exposure to influenza.

When traveling with an unimmunized child:  Even though many vaccine-preventable diseases have become rare in the United States, they may still occur in foreign countries. For example, India, Nigeria and Pakistan continue to have polio outbreaks. Should an unimmunized child become ill with a vaccine-preventable disease, his or her parents should take measures to avoid spreading the disease to others. This could mean cancelling further travel until a doctor determines that the child is no longer contagious. Also, be aware that prior to admission into some countries, immunization against certain diseases, such as Yellow Fever, may be required.

In the U.S., vaccines have reduced or eliminated many infectious diseases that once routinely killed or harmed many infants and children. Parents or caregivers should make the decision to postpone or decline immunizations for their children only after being fully informed of the risks and responsibilities.  For more information on childhood vaccines visit the immunization section of the CDC website at www.cdc.gov/vaccines.