Swollen lymph “glands” – When should you be concerned?

Lymph nodes, sometimes referred to as lymph “glands”, are part of the body’s lymphatic system. The lymphatic system consists of a system of conduits and organized collections of lymphoid tissue that include nodes, the tonsils, and the spleen. Coursing through these channels is liquid called lymph that eventually drains into the bloodstream near the heart, but along the way, it is “filtered” by the lymph nodes.  Within these lymph nodes are high concentrations of disease fighting cells, particularly lymphocytes. While performing their intended function of fighting infection, lymph nodes typically become enlarged. In fact, infection is most common reason for lymph nodes enlargement.

Lymph nodes are found throughout the body, but when enlarged, are usually noticed in characteristic locations, particularly the neck, groin and armpit regions. Lymph node enlargement can be localized to one group of lymph nodes or can be generalized (involving several sites of lymph nodes). For example, enlarged lymph nodes localized to the arm pit could occur as a result of a bacterial infection in a hand wound. Generalized lymph node swelling, on the other hand, could be seen in a systemic illness such as viral mononucleosis. In addition to viral and bacterial infections, other causes for enlarged lymph nodes include immune disorders (lupus, rheumatoid arthritis, etc.), cancers affecting the lymphatic system (leukemia, lymphoma, Hodgkin’s disease), and cancers that have spread (metastasized) from some other part of the body to the lymphatic system.

The discovery of enlarged lymph nodes often causes concern because many people are aware that lymph node enlargement can be an early sign of cancer. Certain features, however, can help to distinguish between those lymph nodes that are enlarged because they are doing their intended job of fighting infection versus those that are enlarged for more ominous reasons. 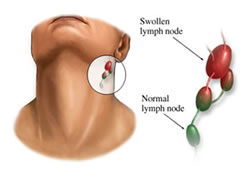 When infection is responsible for enlarged lymph nodes, symptoms such as sore throat, fever, runny nose, or in the case of a skin infection, redness or swelling are usually present. Other signs that indicate that the enlargement is a normal physiologic response are that the size of the nodes is less than one centimeter (0.4 inch) and that the nodes are rubbery in consistency and freely moveable. An even more reassuring sign is the gradual shrinking in size following the infection or inciting event.

The following features of enlarged lymph nodes may be associated with problems other than infection and should be evaluated by a physician:

Most often, enlarged lymph nodes are a result of the body’s immune system working as it should. When lymph nodes are noted, however, they should be carefully monitored to make sure that the enlargement resolves. If not, a visit to the doctor is warranted.

If you or someone in your family would like to know more about the lymphatic system or swollen lymph nodes, Sign into your eDocAmerica account, click on the ‘Ask eDoc’ icon, and send us your questions.

We would love the opportunity to assist you in getting the help you need.