Suffering for Fashion, Part 1 – Men are not immune!

What can cause your center of gravity to be thrown off, constrict blood flow in the neck, put pressure on your back, and predispose you to accidents or cancer? Sounds like something that should be avoided at all costs, right? In fact, these all can be consequences of following the latest styles. Clothing, footwear, and lifestyle trends that many people voluntarily embrace in the name of fashion can all be hazardous to your health.

Fashion is generally considered to be the domain of women. It is true that men don’t seem to have to adjust to changes in fashion as often as women do. However, men are not immune to fashion-related health consequences. This week’s Health Tip explores some of the health consequences that men 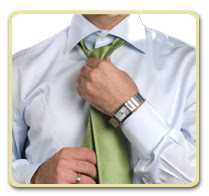 experience from following the latest styles. Next week, we’ll look at how women too “suffer for fashion”.

Neckties: In addition to being uncomfortable, neckties may contribute to other health issues, such as eye problems and accidents. A study published in the British Journal of Ophthalmology found that tight neckties, pressing on the jugular veins, increases pressure within the eye. Over time, this increased pressure can lead to the development of glaucoma, a major cause of retinal degeneration and blindness. Neckties can also be involved in accidents should they become entangled in machinery or in an elevator door.

Tight underwear: In some instances, elevation of testicular temperature causes a reduction in the quality and quantity of sperm, leading to infertility. Wearing tight underwear, which is thought to increase scrotal temperature, has been proposed as one mechanism for this. At least one study, however, comparing scrotal temperatures of groups of men wearing boxers vs. “tighty whities” did not demonstrate a significant temperature difference between the two.

Tanning: The “healthy glow” from a tanning bed or sun exposure is anything but. Darkening of the skin cells from tanning is a defense mechanism against further damage brought about from UV radiation in the first place. A report by the International Agency for Research on Cancer concludes that exposure to UV radiation from any source can lead to skin cancer, including melanoma, premature skin aging, and eye damage, such as cataracts.