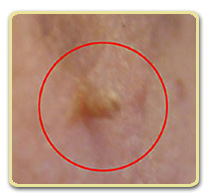 Skin tags, known in medical terms as “acrochordons” or “fibroepithelial polyps”, are very common benign skin growths affecting over half of the general population at some time in their lives.  They most commonly occur in skin folds, especially in the neck region, armpits, and groin.  Other common areas for the development of skin tags include the eyelids and upper chest, particularly under  female breasts.  They are usually flesh colored and may appear similar to a small piece of hanging skin. Inspection often shows them to be “pedunculated”, that is, projecting from the surrounding skin from a narrow stalk.  While usually quite small, a millimeter or two across, on occasion they can be as large as a grape.

Who gets skin tags?  The reasons that skin tags develop are not well understood.  Although they occur frequently in perfectly normal people, they are even more common in the following circumstances:

Do skin tags cause any symptoms?  Skin tags are usually noticed coincidentally, since they do not cause pain or any other symptoms.  They can, however, become irritated and may even bleed from rubbing against adjacent skin, jewelry, or clothing.

How are skin tags treated?  As long as the skin tag is not growing or changing in appearance, it is acceptable to just leave it alone.  A biopsy to determine the exact cause should be considered for skin tags-like growths that are getting larger, bleed, or that are darkly pigmented.  People sometimes choose to have them removed if they are cosmetically unacceptable or if they become irritated, for example, when rubbing against the collar.  In the doctor’s office, these growths may be removed by freezing (cryotherapy), electrical burning (cautery), or by cutting the lesion off at its base.

Can I remove skin tags myself?  A number of lay medical websites offer information for self-treatment of skins tags.  These treatments include tying a string around the stalk to cut off the blood supply and use of OTC solutions for removing warts.  In most cases, however, it’s best for a doctor to take care of skin tags.  Since they can be located in areas of the body that would be awkward to take care of oneself, self-treatment can be difficult.  Some of the self-care methods mentioned, e.g. snipping the skin tag at its base, could lead to complications including bleeding, infection or scarring.  Additionally, there is the possibility that the skin tag is something more serious, such as skin cancer.