What is Shingles?  Shingles, known in medical jargon as herpes zoster, is an outbreak on the skin that is caused by the same virus that causes chickenpox — the varicella-zoster virus (VZV).  Following a bout of chickenpox, the virus retreats into nerve fibers and becomes dormant.  Shingles occurs when the virus becomes reactivated.  What causes the virus to become active again is poorly understood, but it is most often associated with aging, stress, or an impaired immune system. 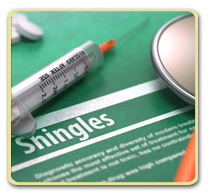 What are the symptoms of shingles?  The first sign of shingles, even before the occurrence of a rash, is often burning, tingling, or itching, usually confined to a specific area on one side of the body. This is because the virus has taken up residence in the nerves that supply sensation to a dermatome (the skin that is supplied by that nerve). After several days to a week, a rash of fluid- filled blisters, similar to chickenpox, develops. The most common location for shingles is a band on one side of the trunk near the waistline.  The onset of the rash is typically accompanied by pain which can be mild or intense. The rash characteristically consists of red patches and small blisters (vesicles) that look similar to chickenpox.  After a few days, the blisters pop forming small ulcers that eventually dry and form crusts.  After 2 to 3 weeks, the crusts fall off and the skin heals.

How serious is shingles?  In healthy people, the pain resolves and the skin heals within 3 to 5 weeks. People with compromised immune systems– from use of immunosuppressive medications such as prednisone, from serious illnesses such as cancer, or from infection with HIV — are at special risk of developing shingles. These people can have repeated episodes of shingles or overwhelming skin involvement.  It is also possible for shingles to affect the eye which can lead to permanent blindness. It is recommended that people with shingles in or near the eye should see an Ophthalmologist immediately.

Perhaps one of the most devastating aspects of shingles is known as post-herpetic neuralgia. This complication affects up to half of those over the age of 60 who contract shingles and causes persistent pain, sometimes quite severe, after the rash has healed.  Severe cases of post-herpetic neuralgia can cause significant disability due to insomnia, loss of appetite and depression.

Is there any treatment for shingles?  In most cases, shingles will resolve on its own, and may not require specific treatment except for symptom relief, such as calamine lotion for itching or medications for pain. Several antiviral drugs have been approved by the FDA for treating shingles including acyclovir (Zovirax), valacyclovir (Valtrex) and famciclovir (Famvir).  If started soon after the onset of a shingles, they have been shown to reduce the severity and duration the outbreak as well as offering protection against postherpetic neuralgia.

Is shingles contagious?  Shingles is considered to be “indirectly contagious”. Unlike chickenpox, shingles can’t be “caught” from someone else. At certain stages of the disease, a person with a shingles rash can pass the virus to someone (usually a child) who has never had chickenpox or received the chickenpox vaccine. In this case, the child will develop chickenpox, not shingles.  A person with chickenpox, however, cannot give someone else shingles.  Shingles comes from the virus hiding inside the person’s body, not from an outside source.
Can shingles be prevented?  In 2006, the Food and Drug Administration approved a VZV vaccine (Zostavax) for use in people 60 and older.  Research has shown that giving Zostavax to older adults will cut the number of cases of shingles in half.  Furthermore, those who contracted shingles in spite of receiving the vaccine were noted to have milder symptoms and a lower likelihood of developing post-herpetic neuralgia.  Zostavax is not an appropriate treatment for active shingles or for post-herpetic neuralgia. It should also not be given to someone who is allergic to one of the components of the vaccine, pregnant women, or to someone who has a compromised immune system.

The Advisory Committee on Immunization Practices (ACIP) recommends a single dose of the shingles (Herpes Zoster) vaccine for adults 60 years old or older whether or not they recall having had chickenpox. This is because studies have shown that 99% of Americans aged 40 and older have had chickenpox, even if they don’t remember getting the disease. Furthermore, even if you have had shingles, you can still receive shingles vaccine to help prevent future occurrences of the disease.