As most people know, heartburn has nothing to do with the heart. It is typically caused by gastric reflux, the regurgitation of acid from the stomach into the lower portion of the esophagus (the tube that connects the mouth to the stomach). The name comes from the similarity in symptoms between reflux symptoms and those of a heart attack. 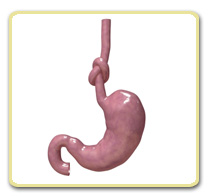 Many people experience occasional heartburn, triggered by a disagreeable food such as coffee, alcohol, tomatoes, spicy foods, or chocolate. Some people, however, have a chronic form of heartburn known as gastroesophageal reflux disease (GERD). In GERD, the sphincter (valve) that prevents the reflux of stomach acid into the esophagus does not function properly. While occasional heartburn is more of a nuisance, GERD can be a much more serious problem. Treatment for GERD typically involves taking antacids to neutralize stomach acid or acid blockers to reduce acid production on a regular basis.

Recently, a new cause for persistent heartburn has been recognized. This condition is known as eosinophilic esophagitis (EE) and is thought to have an allergic or immunologic cause. “Eosinophilic” refers to eosinophils, a type of white blood cell that accumulates in the esophagus in this condition. “Esophagitis” means that the esophagus has become inflamed, in part due to the accumulation of eosinophils. EE can cause all of the same symptoms as classic GERD but does not respond as well (or at all) to standard GERD treatments.

Most cases of EE have been diagnosed since the year 2000, with more cases being diagnosed each year. The increased incidence is primarily related to increased awareness and recognition of this disease. EE is thought to be allergy-related based on the presence of eosinophils which are often seen in increased numbers in other “allergic” conditions, such as asthma, eczema, and hay fever.

Since EE is much less common than GERD, making the diagnosis first requires suspicion as to its presence. Factors that increase the likelihood that someone has EE includes: 1) the presence of other allergic problems, such as asthma or eczema, 2) a family history of allergic conditions, and 3) a poor response to treatment with measures used for GERD. Another major distinguishing feature is that unlike GERD, difficulty swallowing or having food hang up occurs commonly.

Currently, diagnosis is made by taking tissue biopsies during endoscopy (esophagogastroduodenoscopy or EGD). This involves placing a tube-like instrument that contains a light and camera into the esophagus. Areas of the esophagus that are narrowed, red, or contain white spots are suggestive of EE and would be biopsied. The biopsy specimens are then inspected with a microscope looking for the presence and number of eosinophils. In the absence of other conditions, such as esophageal cancer, a high number of eosinophils in the tissue confirms the diagnosis of EE.

As with GERD, medication to reduce stomach acid production (Protonix, Nexium, Prilosec, Previcid, etc.) helps with EE symptoms. In the past, many people with EE required balloon dilation of the esophagus because of areas of narrowing (strictures) that were causing food to hang up. Most of these individuals had not specifically been diagnosed with EE but were thought to have strictures due to chronic reflux of stomach acid. More recently, with the information that this condition could be allergic in nature, treatment has changed dramatically. Along with medications to reduce acid production, dietary therapy and treatment with corticosteroid medication are currently being used.

Since EE can be related to a food allergy, skin or blood testing for sensitivity to common dietary allergens, such as dairy products, eggs, wheat, nuts, and fish is usually performed. If sensitivity to one or more of these foods is detected, they should be removed from the diet. A second dietary intervention involves an elimination diet. This requires the removal of foods that most commonly cause allergy symptoms (shellfish, eggs, wheat, etc.) from the diet. Assuming symptoms improve, foods are added back into the diet one at a time while monitoring for symptom recurrence. If a certain food appears to be causing symptoms, it may need to be permanently removed from the diet. Environmental allergens, such as pollens, molds, cat, dog and dust mite allergens may also be related to the development of EE.

Corticosteroid medications, similar to prednisone, are also effective for treating EE. Flovent (fluticasone propionate), an inhaled medication used in treating asthma, is the most commonly used steroid in this condition. Rather than inhaling the medication, however, it is swallowed. This helps to decrease the build-up of white blood cells in the walls of the esophagus and reduce inflammation.

If you have allergies and GERD, particularly if difficulty swallowing is a major feature, it may be a good idea to consult your doctor or discuss with an eDoc about the possibility that your symptoms are due to this recently recognized condition.