By edocamericaJune 23, 2011Health Tips
Poison ivy is a common plant found in most areas of the United States that contains highly allergenic oil called urushiol. Approximately 85 percent of the population will develop a skin reaction if exposed to poison ivy. The characteristic rash consists of lines of itchy, red bumps or blisters. Two related plants, poison oak and poison sumac, also contain urushiol, and will produce a similar rash. The rash from poison ivy, oak, or sumac usually lasts 1 to 3 weeks and in most cases goes away without treatment.
Is direct contact with the plant necessary to develop a poison ivy rash? Direct contact with the plant is the most common way that urushiol oil comes 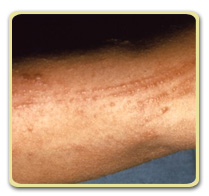 in contact with the skin. There are other ways, however, that exposure can occur. Urushiol that was not removed from the skin or was trapped beneath the fingernails can be spread to other areas of the body. Gardening tools used to remove poison ivy plants can become contaminated with urushiol oil. Since the allergen can remain active for some time, skin exposure can occur later when picking up the tool. Even the smoke from burned poison ivy may contain urushiol oil that could irritate the eyes or airways.
What is the best initial treatment of poison ivy? If you suspect that your skin has touched poison ivy, wash the area with soap and water as soon as possible. Clothing that has been contaminated should be washed in hot sudsy water. If there is a possibility that you have gotten the allergen in your eyes, rinse them with plain water. Poison ivy scrubs or washes that can further help to remove the urushiol oil from the skin include Tecnu Extreme and Zanfel. Both of these OTC products have been shown to decrease the likelihood of developing poison ivy rash. Once the rash has developed, treatment is primarily directed at controlling the itching. Measures that will help with this includes:
Why does poison ivy rash seem to spread over several days after exposure? The rash from poison ivy occurs only where the allergen (urushiol) has touched the skin. In general, the higher the exposure to the allergen, the more severe the skin reaction, and the sooner the rash will develop. The development of the rash may be delayed in areas of the skin with less exposure to the plant oil, making it appear that the rash is spreading. Another reason for the rash continuing to appear is from repeated exposure to the allergen from plant oil trapped under the fingernails, remaining on clothing, or on pet fur.

Can poison ivy be spread to someone else? Poison ivy rash cannot be spread, 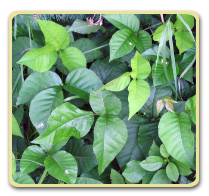 even if someone else is exposed to fluid from the blisters. By the time that the rash appears, the urushiol that produced the skin reaction will have been absorbed or washed off the skin.

What is the best way to prevent getting poison ivy? The best way to prevent the rash is to learn to identify the plants and avoid exposure. While the old saying, “leaves of three, let it be” will help with identification, other characteristic features of poison ivy include a middle leaflet with a longer stalk than the other two, and leaflets that are fatter near their base and roughly the same size. A related urushiol-containing plant, poison oak, shares some of these characteristics although the leaves are distinctly “oak-like”. The less common urusiol-containing plant, poison sumac, has a markedly different appearance. If contact with the plant is unavoidable, it will help to wear long sleeves, long pants, and vinyl gloves. Barrier creams, such as Ivy-Block, are approved by the FDA to reduce exposure to poison ivy allergens, but may not be effective for everyone.

Does poison ivy rash ever require medical attention? While poison ivy rash is usually a minor annoyance and goes away on its own in a week or two, sometimes the rash or a complication of the rash warrants professional care. If the rash affects sensitive areas, such as your eyes, mouth or genitals, more aggressive treatment, as with oral or injectable steroids, may be necessary. This may also be required in the case of widespread or severe skin involvement. The development of fever, yellow drainage, or spreading skin redness suggests that a secondary bacterial infection may be present which could require treatment with antibiotics.

If you have any questions about poison ivy, please log into your account and send us your question. We are here to help.