Photodynamic therapy (PDT) is gaining acceptance as a convenient and relatively complication-free method of treating precancerous skin lesions on the face. These lesions, known as actinic keratoses (AKs), are primarily caused by damage from UV radiation from the sun. If left untreated, some of these AKs will eventually develop into squamous cell cancer (SCC). PDT, application of a chemotherapy cream (5-FU), and cryotherapy (freezing) are all effective methods of treating AKs in order to prevent the development of SCC. 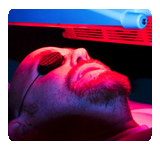 How does PDT work? PDT, also known as ALA/PDT, involves the use of a photosensitizing drug (one that becomes active when exposed to light) along with a light source. In the U.S., the most common photosensitizing drug for this purpose is aminolevulinic acid (ALA) which is marketed under the trade name Levulan®. When applied to the face and absorbed by AK cells, the precancerous cells become highly sensitive to light. With exposure to FDA-approved light sources (Blu-U and ClearLight) a reaction occurs that destroys the AK cells.

What are potential after effects of PDT? During treatment, most patients experience sensations of heat, tingling, or burning. An expected after effect of PDT is redness of the skin similar to sunburn. In some instances, temporary blistering and severe pain may occur. The skin appearance returns to normal within 2 to 3 weeks.

Are there other benefits to PDT? Following treatment, aging-related skin damage such as skin lines and blotchy pigmentation may also be improved. While used primarily for treating sun-damaged skin, PDT is used for other skin conditions, such as acne and rosacea. Additionally, PDT is starting to be used in the treatment of certain cancers, even those involving internal organs, such as the esophagus and lung.

What are the alternatives to PDT? PDT is the relative “new kid on the block” in the treatment of sun-damaged facial skin. Prior to its introduction, most AKs were treated individually with cryotherapy (freezing) or with the topical application of a chemotherapy medication, 5-flurouracil (5-FU). A drawback to cryotherapy is that only visible AKs can be treated. With PDT, even those AKs that have not yet progressed to the point of being seen are addressed. Topical chemotherapy treatment for AKs involves daily applications for weeks and can be associated with severe skin reactions.

The number of skin cancers related to sun exposure has increased annually for many years. PDT is emerging as an important modality to treat precancerous AKs in order to prevent the development of many of these cancers. Advantages of topical PDT are that the method is non-invasive, effective, and generally gives a good cosmetic outcome.