Peripheral Neuropathy (PN) is one of the most common, yet least well known, chronic conditions in the U.S., affecting over 20 million people. PN is not a single disease, but is a group of over 100 disorders that occur due to various conditions affecting the peripheral nervous system. 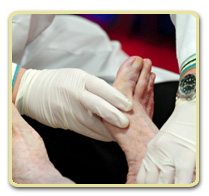 What is peripheral neuropathy? Loosely translated, “neuropathy” means disease affecting nerves. In the case of PN, peripheral nerves become damaged or diseased and are unable to communicate messages between the central nervous system and the portion of the body that they supply. Any of the three types of peripheral nerves – sensory, motor, and autonomic – can be affected by PN. Some of the more common manifestations of PN include: pain, numbness or tingling of the hands or feet, problems affecting bowel or bladder function, and muscle weakness.

What Causes Peripheral Neuropathy? There are many causes of PN, but in up to a third of cases, an underlying cause is never found. These cases are known as “idiopathic”. Another third of cases of PN are caused by complications from diabetes. Diabetes causes damage to peripheral nerves as a result of long-standing elevated blood sugar levels. Up to one half of diabetics will eventually develop some type of peripheral neuropathy. The remainder of cases of PN occurs from a variety of causes including:

As we look further into Peripheral Neuropathy in next week’s Health Tip, it is important to remember that PN is not a disease itself, but is a manifestation of damage to peripheral nerves that can occur from a variety of causes.