What do Michael J. Fox, Mohammed Ali, and more than a million people in the U.S. have in common? All have a degenerative disorder of the central nervous system known as Parkinson’s disease. It is named after the English doctor James Parkinson, who in 1817 called the disease “shaking palsy”, after one of the condition’s most prominent symptoms. Since most people develop Parkinson’s disease after the age of 60, and with life expectancy increasing, we can expect it to be more prevalent in the future. 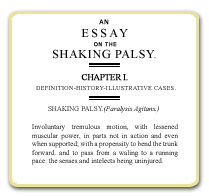 What causes Parkinson’s disease?  Parkinson’s disease results from the death of brain cells that produce a substance known as dopamine.  Dopamine is a neurotransmitter, a chemical that is responsible for sending messages to other nerve cells (neurons) of the brain.  It has a role in controlling a number of functions, including voluntary movement, thinking, and mood.  The cause of this cell death is unknown, although it has been linked to genetic mutations, head trauma, and exposure to environmental toxins.

What are its symptoms?  The four primary symptoms of Parkinson’s disease are:

Initially, the symptoms of Parkinson’s disease are subtle and develop gradually.  The most common early symptom of Parkinson’s disease is known as a “pill rolling tremor” in which the thumb and fingers move involuntarily in a manner resembling the rolling of a pill between the fingers.  As the disease progresses, the tremor can cause problems with activities of daily living, such as use of the hands for fine motor activities.  Many people with Parkinson’s will have a characteristic gait, taking small steps or “shuffling” with the feet close together.  With the loss of movement in the muscles in the face, an expressionless stare, often called the “Parkinson’s mask”, may be present.  Other symptoms of Parkinson’s disease include impairment of speech and swallowing and depression or emotional instability.

Is there an effective treatment?  Descriptions of Parkinson’s disease treatment date back many thousands of years.  In ancient India the disorder was called Kampavata and was treated with the seeds of a plant known as velvet bean or cowitch.  This plant, with the botanical name Mucuna pruriens, was later found to contain levodopa or L-dopa, a substance that is converted into dopamine in the brain.  Today, administration of levodopa, usually in combination with a second drug known as carbidopa (trade name Sinemet), has become the standard treatment for Parkinson’s disease.  Carbidopa delays the conversion of levodopa into dopamine until it reaches the brain.

In addition to levodopa/carbidopa, a variety of other drugs are approved for treating Parkinson’s disease.  A class of drugs knows as monoamine oxidase B inhibitors prevent the breakdown of dopamine in the brain.  These medications include selegiline (Eldepryl) and rasagiline (Azilect).  Other drugs, such as bromocriptine and ropinirole, mimic the role of dopamine in the brain.  A common drug used to treat influenza, amantadine, also appears to reduce symptoms.

Since symptoms tend to wax and wane and all of the medications used to treat Parkinson’s disease are associated with side effects, it is typical for the treating physician to have to adjust medication dosages and regimens periodically.

Is surgery an option for treating Parkinson’s disease?  Deep brain stimulation (DBS) is a procedure in which surgeons implant electrodes connected to a device to deliver electrical impulses to a part of the brain affected by Parkinson’s disease.  It is used primarily in individuals with severe, otherwise unmanageable motor symptoms.  DBS can reduce the involuntary movements that are a common side effect of levodopa as well as reducing tremors, slowness of movements, and gait problems.  The transplantation of dopamine-producing stem cells is also being investigated.