September is Ovarian Cancer Awareness month. The American Cancer Society has estimated that in 2014, approximately 22,000 women will receive a new diagnosis of ovarian cancer and over 14,000 will die of this disease.  By learning more about this type of cancer, it is hoped that more women will be directed toward appropriate screening to allow its detection as soon as possible.  Women diagnosed in the earliest stages of ovarian cancer, which has been dubbed “the silent killer”, have a much higher chance of survival. 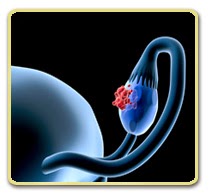 1.  The incidence of ovarian cancer increases as women become older.  While ovarian cancer can occur at any age, approximately half of the women who will be diagnosed with ovarian cancer are over the age of 60. After menopause, women should not “let their guard down” when it comes to being screened or reporting problems that could be caused by ovarian cancer.

2.  The Pap smear is not a screen for ovarian cancer. It is effective in the early detection of cervical cancer, but having a normal pap smear does not exclude the possibility of having ovarian cancer.

3.  Ovarian cancer symptoms may be vague or non-specific.  The most common symptoms of ovarian cancer are abdominal swelling or bloating, pelvic pressure or abdominal pain, difficulty eating or feeling full quickly, and having to urinate urgently or frequently. While these symptoms are more commonly associated with conditions other than ovarian cancer, if one or more of these is present for more than a couple of weeks, you should seek attention from your health care provider.

4.  Survival of ovarian cancer is improved with early detection. If treated before the cancer spreads beyond the ovary, the five-year survival rate is around 92%.  Unfortunately, only 15 to 20% of ovarian cancer is found at this stage.  As a result of this delay in diagnosis, ovarian cancer accounts for more deaths that any other cancer of the reproductive system, including cervical and uterine cancer.

5.   Ovarian cancer risk is higher in women who are overweight. The American Cancer Society reports that obesity (a body mass index of 30 or more) is an important risk factor for developing ovarian cancer.  This risk was increased by 50% in the heaviest women.

7.   Ovarian cancer can run in families.  Women who have a mother, daughter, or sister with ovarian cancer have about a three times higher risk of developing the disease. Also, women with a family history of cancer of the breast, uterus, or colon may also have an increased risk of ovarian cancer.  This is caused by a change (mutation) in certain genes leading to a Heredity Cancer Syndrome.

9. Confirmation of ovarian cancer requires a biopsy.  Tests used to evaluate for the presence of ovarian cancer, such as ultrasound, MRI scan, or CT scan may demonstrate an ovarian mass, but the only way to determine for certain if a growth is cancer is to remove a sample of the growth from the suspicious area and examine it under a microscope.  Tissue for examination can be obtained with a minimally invasive procedure called laparoscopy or during an open surgical procedure.

10.  In some cases the risk for developing ovarian cancer can be reduced.  The general recommendations for reducing the risk of most types of cancers include maintaining a healthy weight, eating a balanced diet, and staying physically active.  Women with a family history suggestive of a syndrome linked with a high risk of developing ovarian cancer should consider undergoing genetic screening.  Premenopausal women found to have BRCA gene mutations can reduce their risk of both ovarian and breast cancer following removal of the ovaries.  In certain situations (e.g. women who are carriers of BRCA1- or BRCA2-mutations), taking oral contraceptives may also play a role in preventing ovarian cancer.