If you have expired, unused, or unneeded drugs in the house, the Drug Enforcement Administration (DEA) wants to make it easier for you to dispose of them. Saturday, September 29th has been designated as National Drug Take-Back Day and sites throughout the United States have been designated to take your unwanted drugs for disposal. Drugs may be turned in at these sites from 10 a.m. to 2 p.m. 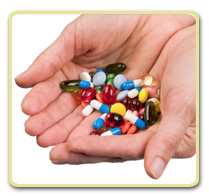 Can one day really make a difference? During the last Drug Take-Back Day on April 28, 2012, over 276 tons of unwanted or expired medications were turned in for proper disposal. Law enforcement offices as well as other locations were some of the 5,600 sites that were made available to turn in unwanted drugs. During the four Drug Take-Back Days that have been conducted so far, over 1.5 million pounds of unwanted drugs have been removed from circulation.

Why not just flush them down the toilet? Many drugs can be thrown in the household trash and it may be appropriate for a few drugs to be flushed down the toilet. Flushing is recommended for the small group of medicines that may be especially harmful, or even fatal, if they are ingested by someone other than in whom they were prescribed. Most of this group of drugs are narcotic pain medicines. When flushing is recommended, specific disposal instructions will be included on the drug label or in the accompanying patient information sheet. It may be best, however, to dispose of these medicines through a drug take-back program.

Why the concern about unused drugs? Keeping unused drugs in the home represents a risk for unintentional use or overdose as well as for illegal abuse of certain drugs, such as narcotic pain relievers. Additionally, concerns have been raised about trace levels of drugs found in rivers and lakes, and in some community drinking water supplies. The FDA, however, contends that most of the trace amounts of medicines found in water systems to date are a result of the body’s natural routes of drug elimination.

Drug take-back programs for disposal are the best way to remove expired, unwanted, or unused medicines from the home and to reduce the chance that others may accidentally take the medicine. To find a collection site near you, go to the DEA search page and click the ‘Find a Collection Site Near You’ button then enter your zip code, county, or city. Alternately you can call 1-800-882-9539 to find out the nearest National Drug Take-Back Day disposal site.