While cigar-smoking, mint julep-drinking Mark Twain may not seem like a paragon of healthy living, he did provide us with some thought-provoking quotes directed toward health.

“Be careful about reading health books.  You may die of a misprint.”
~ Mark Twain 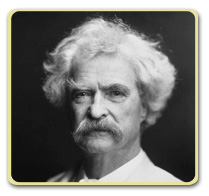 This quote, written prior to the development of personal computers or the World Wide Web, has particular significance today.  While a massive amount of health-related information is available on the Internet, the accuracy of this information is highly variable.  Not only is the information found on many health-related websites based on insufficient scientific evidence, the accounts of personal health issues on internet health forums are often misleading or biased.  Even studies published in respected medical journals can sometimes turn out to be flawed. A few years ago, researchers looked at the conclusions drawn from studies published in highly respected journals, such as the Journal of the American Medical Association (JAMA), the Lancet, and the New England Journal of Medicine to see if their findings stood the test of time. This analysis included 45 highly publicized studies reporting on a drug or other treatment that was considered to be successful.  Subsequent research contradicted the results of 7 of these studies and reported weaker than initially thought results for 7 others.  In other words, nearly one-third of the original reports did not hold up over time.  The refuted studies dealt with a wide range of drugs and treatments such as the use of estrogen to protect women from heart disease and use of Vitamin E to prevent heart attacks. The take home message from this is that a single study or internet source does not necessarily provide definite evidence of the effectiveness of a medication or other treatment. What is accepted as “gospel” this year may be refuted or found to be obsolete the next.

“Anger is an acid that can do more harm to the vessel in which it is stored than to anything on which it is poured.” ~ Mark Twain

It has long been thought that anger or hostility could lead to the development of coronary heart disease (CHD). In order to test this theory, researchers pooled the results of 44 separate studies that had previously looked for a connection.  After analyzing the data, it was found that anger and hostility was indeed associated with a higher occurrence of coronary heart events, both in people thought to be healthy as well as in those with underlying CHD. The study found that angry or hostile people with no prior history of heart disease were 19% more likely to develop CHD than their calmer counterparts. The mechanism for this seems to be related to the “fight or flight response” in which stress hormones, including adrenaline and cortisol, cause the heart rate to go up, blood pressure to rise and blood vessels to constrict. The authors of this study concluded that in addition to conventional forms of treatment for CHD, when anger or hostility is clearly present, psychological care should also become part of the management.  Anger and hostility may not be the only emotional issue related to the development of CHD.  Other researchers have also found that high degrees of anxiety or depression can contribute to heart disease development.

“Giving up smoking is the easiest thing in the world. I know because I’ve done it thousands of times.” ~ Mark Twain

More people in the United States are addicted to nicotine, a drug that is found naturally in tobacco, than to any other drug. Research suggests that nicotine may be as addictive as heroin, cocaine, or alcohol.  Among all current U.S. adult cigarette smokers, nearly 7 out of every 10 (68.8%) reported in 2010 that they wanted to quit completely. But as many smokers have found, quitting smoking can be very difficult and often requires several attempts in order to succeed.  Some of the methods available today to help with smoking cessation include:

The point is that quitting smoking is hard and may require several attempts.  Fortunately, a variety of methods, most of which were not available to Mark Twain, can help to improve the success rate.