By edocamericaMay 3, 2012Health Tips
Statistics from the CDC indicate that there has been a progressive rise in the number of cases of Lyme disease diagnosed. It is unclear whether this increased incidence is because of greater awareness and recognition of the disease among physicians, or whether more people are becoming infected. In 2010, 94% of Lyme disease cases were reported from 12 states, mostly in the northeastern U.S., near the town where the disease gets its name-Lyme Connecticut.

What causes Lyme disease? Lyme disease is an infection caused by a type of bacteria known as Borrelia burdorferi. The infection is most often acquired from the bite of an infected deer tick, also known as a black-legged tick. Ticks that spread the infection are in the nymph stage of their life cycle and are quite small when compared to the adult ticks. The infection is spread when a young tick feeds on an infecte bcv  ./,d animal, taking Borrelia bacteria into its body. If the tick then feeds on a human, the bacteria can be passed along to its new host. There is no evidence that Lyme disease can be passed on from person-to-person. 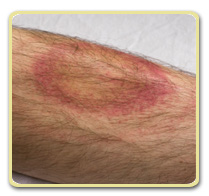 What is the first sign that someone may have Lyme disease? Lyme disease produces different manifestations at different times during the course of the illness. The first sign of an infection is usually a rash called erythema migrans (EM). This is a circular rash that develops at the site of the tick bite. This rash occurs in approximately 70-80% of those infected, appearing anywhere from a few days to a month after the tick bite. EM gradually expands over a period of several days and can reach up to 12 inches in diameter. Sometimes the center of rash clears, resulting in a “bull’s eye” appearance.

What symptoms are associated with Lyme disease? Along with the rash, most people with early Lyme disease develop symptoms such as fatigue, chills, fever, headache, muscle and joint aches. Red rings can develop at the site of tick bites for reasons other than Lyme disease. Localized inflammation related to the tick bite itself or a secondary infection by Strep bacteria can produce a similar, although usually not as large, area of redness. If treatment is not begun, other symptoms develop within days to weeks. These include facial paralysis, headaches, neck stiffness, heart palpitations and “migratory” joint pain which moves from joint to joint. Late manifestations of the disease includes arthritis, particularly affecting large joints, such as the knees, and neurological complaints including mental status changes, altered sensation, malaise, headache, and sleep disturbance.

Is there a test available to diagnose Lyme disease? The tests used in diagnosing Lyme disease are most accurate a few weeks after an infection develops. This is when the body has begun producing antibodies to fight the infection. Tests that have been developed to detect antibodies to Lyme disease include the enzyme-linked immunosorbent assay (ELISA) test and the Western blot test. A test called the polymerase chain reaction (PCR) may be used to diagnose chronic cases of Lyme disease.

How is Lyme disease treated? Most cases of Lyme disease can be cured with antibiotics, especially if treatment is begun early in the course of illness. Antibiotics that are effective for Lyme disease include doxycycline, amoxicillin, and cefuroxime (Ceftin).

Can Lyme disease be prevented? The best way of avoiding Lyme disease is by avoiding being bitten by infected ticks. A vaccine that was once used to prevent infections is no longer available. The CDC offers the following recommendations for protecting you from Lyme disease or other tick-borne illnesses:

One of the most important reasons for early recognition and treatment of Lyme disease is that a percentage of those infected will have symptoms that last months to years. It appears that the sooner during the course of the disease that treatment is instituted, the less likely a persistent disease will occur. With measures to avoid tick bites and with recognition of early manifestations,most severe or chronic cases of Lyme disease can be avoided.