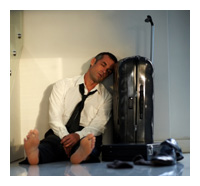 Anyone traveling by rapid transit to more distant locations can be affected by jet lag. Known in medical jargon as desynchronosis, jet lag is caused by the body’s internal clock having to be reset to a new time zone. It is typically worse for travelers crossing three or more time zones. Although considered a sleep disorder, jet lag can develop in someone who ordinarily does not suffer from insomnia or other sleep disturbance when at home.

Features of jet lag. Jet lag most commonly affects sleep patterns. When considering the time of day at the destination, people traveling to the east will become sleepy later than usual and those traveling west, will awaken earlier. Until adjustment to the new time zone occurs, jet lag can adversely affect performance in both physical and mental tasks. Other features of jet lag include irritability, fatigue, and difficulty concentrating. Certain symptoms that are sometimes attributed to jet lag, such as foot swelling, earache, and dry eyes, are more likely related to the mode of travel, such as the cramped seating and low humidity inside an airplane cabin.

Why jet lag occurs. A structure in the brain called the hypothalamus governs a number of body functions, including sleep. It serves as an internal clock to help tell the body the time of day. Light sensing nerves from the eye inform the hypothalamus of when it is dark or light outside. In response to signals from the hypothalamus, a small gland known as the pineal body produces more or less of a hormone known as melatonin. When the pineal body gets the message that the sun has set, more melatonin is produced, which causes us to become sleepy. When the sun comes up, the pineal gland stops producing melatonin, encouraging us to wake up. Jet lag occurs because of a delay in the hypothalamus adjusting to the light/dark cycles of a new environment.

Can jet lag be prevented? With long journeys that cross a number of time zones, some degree of jet lag is inevitable. Nevertheless, there are certain measures that may help to prevent or shorten the period of time that jet lag symptoms occur. Measures that may help include:

Are medications available for treating jet lag? The American Academy of Sleep Medicine (AASD) supports the short-term use of hypnotics (sleep medications) for jet lag-induced insomnia. Specific sleep medications that have been shown to be effective include zolpidem (Ambien) and temazepam (Restoril). Although controversial, some clinicians advocate the use of 0.5 mg to 5 mg of melatonin during the first few days of travel. Several studies have demonstrated that melatonin can help with jet lag by reducing the number of days required to establish a normal sleep pattern, improving alertness, and reducing daytime sleepiness. As a nutritional supplement, however, some concern exists regarding the purity of melatonin since the Food and Drug Administration does not regulate its production. Additionally, there are a number of potential medication interactions with melatonin. Anyone taking prescription medications should check with their doctor to make sure that it is safe to take melatonin along with their regular medications.

How long does it take to get over jet lag? This varies depending on the individual, the direction of travel, and the number of time zones crossed. Some people may not be bothered at all, particularly when crossing only one or two times zones. Crossing more time zones or traveling eastward generally increases the time required for adaptation. As a rule, when traveling in an eastward direction, the number of days that sleep will be disrupted is equal to two thirds of the number of time zones crossed. For example, if six time zones are crossed, it may take up to 4 days for the body to become adjusted to the new time zone. Slightly less time is required for adjustment when traveling to the west.
If you have any questions about jet lag, please log into your account and send us your question. We are glad to help.