Iron is an important building block for red blood cells. When the body lacks adequate amounts of iron, red blood cells become smaller and are produced in inadequate numbers. This results in decreased hemoglobin levels, the protein that transports oxygen in red blood cells. This condition is known as iron deficiency anemia and is the most common reason for having a “low blood count”. 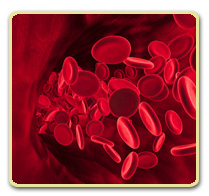 What causes iron deficiency anemia? Most people are aware that iron deficiency anemia can occur because of not getting enough iron in the diet. Vegetarians have to be particularly careful to include iron-fortified foods or vegetable sources of iron (beans, tofu, dark green leafy vegetables, etc.), since foods with the highest iron content are primarily animal based (meat, poultry, fish).

While inadequate intake is a common cause, there are a number of other reasons for the development of iron deficiency anemia. Women with heavy periods or gynecological conditions associated with excessive bleeding may develop iron deficiency anemia because the iron in red blood cells, which is usually recycled, is lost from the body. Likewise slow and sometimes unnoticed blood loss (such as that from a stomach ulcer, colon polyp, or colon cancer) can result in iron deficiency anemia.

Two increasingly common causes of iron deficiency anemia develop because of the inability to absorb iron from the intestine. Celiac disease, an autoimmune disease that damages the small intestine interferes with absorption of iron from food. Likewise, people who have undergone gastric bypass may also lose the ability to absorb iron due to decreased gastric acid secretion and from bypassing the first portion of the small intestine (duodenum).

Pregnant women are at risk of developing iron deficiency anemia because of an increased blood volume during pregnancy, as well as the demands of the growing fetus for iron. Infants who drink cow’s milk in the first year of life are at risk for iron deficiency anemia because cow’s milk does not have enough of the iron infants need to grow and develop.

How is iron deficiency anemia treated? The treatment of iron deficiency anemia hinges on the underlying cause. When blood loss is responsible, the source for the bleeding should be addressed. This could necessitate medical treatment for a bleeding ulcer or surgery in the case of bleeding fibroid tumor or colon cancer. Avoidance of sources of gluten (when, rye, barley) with subsequence easing of the inflammation in the small intestine will allow someone with celiac disease to absorb iron normally.

Even if the cause of the iron deficiency is identified and treated, it is usually necessary to increase dietary sources of iron and to take iron supplements until iron stores are restored. The best iron sources include meat, poultry, fish, legumes (lima beans, peas, pinto beans, etc.), dried fruits such as apricots, prunes and raisins, iron-enriched pastas, grains, rice, and cereals, and green vegetables (spinach, broccoli, kale, etc.). Medicinal iron used in treating patients with iron deficiency is higher than the amount found in most daily multivitamin supplements. Most people with iron deficiency will need 150-200 mg per day of elemental iron per day. There are many forms of iron supplements which contain different amounts of elemental iron: 1 gram of ferrous gluconate = 120 mg elemental iron (12% iron); 1 gram of ferrous sulfate = 200 mg elemental iron (20% iron); 1 gram of ferrous fumarate = 330 mg elemental iron (33% iron). The effectiveness and side effects are similar for these different forms when used in equal doses of elemental iron. Vitamin C (ascorbic acid) improves iron absorption, and some doctors recommend that you take 250 mg of vitamin C with iron tablets. Possible side effects of iron tablets include abdominal discomfort, nausea, vomiting, diarrhea, constipation, and dark stools. In the case of a severe iron deficiency anemia, particularly when the inability to absorb oral iron is responsible, administration of iron through the vein may be necessary.