By edocamericaAugust 11, 2011Health Tips
“Memory… is the diary that we all carry about with us.” -Oscar Wilde

Last week we looked at some of the causes for people’s memory to “slip”. These included medication side effects, ageing, medical conditions, and unhealthy lifestyle choices. By addressing the underlying cause, it is possible that memory can be improved. For example, if medications are responsible for the memory problem, discontinuing or changing medications can have a beneficial effect. Even memory deficits related to getting older can be helped. This occurs through a process known as “neuroplasticity” that allows the brain to form new pathways or alter existing connections. Today we’ll look at a few “tricks” for boosting memory as well as some of the supplements that have been touted to help.

Challenge your mind. The saying “use it or lose it” applies equally well to the mind as it does to our muscles. The more you work out your brain, the better you’ll be able to remember information. One scientific study showed that older Americans can improve their memory by instituting a memory-improvement plan that included regular mental exercises, such as working crossword puzzles. A second study found that elderly individuals who frequently engaged in leisure activities such as reading, playing board games, playing a musical instrument, or dancing were less likely to develop dementia in the future. The best brain exercising activities challenge you to develop and use new brain pathways. Activities that appear to be particularly helpful include those that are new or unfamiliar and those that take some mental effort to perform. 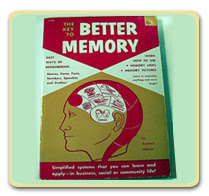 Will taking supplements help with memory? Despite claims that various products can improve memory, the research supporting the use of most of these is suggestive at best. The following are some of the memory-promoting supplements that you may have heard about: