Recently, I wrote a Health Tip on the topic of “Summer Colds”.  That particular tip was actually inspired by the viral upper respiratory tract infections that both my wife and I experienced a few weeks ago. While I usually try to avoid writing in first person in my Health Tips, an interesting side issue related to these infections has prompted this editorial consideration. 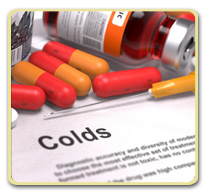 As mentioned in the article on summer colds, the common cold can be caused by more than 200 different viruses, with most of them belonging to class of virus known as rhinoviruses. During warmer
months, however, another class of virus, enteroviruses, becomes more prevalent.  While both rhinoviruses and enteroviruses produce typical cold symptoms (runny nose, sore throat, etc.), enterovirus infections appear to last longer and are more likely to be associated with certain symptoms such as headache, fever, diarrhea and conjunctivitis (pink eye).

Although there was some variation in the types of “itis-es” experienced by my wife or me, between us we pretty much covered the bases with pharyngitis (sore throat), otitis (ear ache), conjunctivitis (pink eye), bronchitis (cough), sinusitis (facial pain) and/or neuritis (skin hypersensitivity).  Almost certainly these symptoms were manifestations of a “summer cold”.

While both of us have completely recovered from our infections, what has prompted this Health Tip is the repeated question that we received from family or friends (some of whom are in the medical field) when they found out that we were sick—–“Are you taking antibiotics?”

With rare exception, viral upper respiratory tract infections are ‘self-limited’, meaning that they will resolve on their own in about a week.  Treatment for the most part is directed at specific symptoms, such as acetaminophen for fever or muscle aches or a decongestant for nasal stuffiness.  Antibiotics are ineffective at shortening the duration or severity of a viral infection such as the common cold.  In fact, inappropriate use of antibiotics has been responsible for causing a number of serious problems including the development of antibiotic resistance, allergic reactions, and diarrheal infections caused by a bacterium known as Clostridium difficile.

Antibiotic resistance in particular is considered to be one of the world’s most pressing public health problems. The number of bacteria resistant to antibiotics has increased in the last decade, in large part because of inappropriate antibiotic usage. Every time a person takes antibiotics, sensitive bacteria are killed, but resistant germs may be left to grow and multiply. The resulting drug-resistant bacteria may not respond to treatment with previously effective antibiotics. This can lead to serious infections that require more expensive antibiotics including those that can only be delivered through an intravenous line.  There have been many instances in which resistant bacterial infections have resulted in hospitalization and even deaths.

In general, viral respiratory tract infections come on fairly quickly and are not associated with high fever or severe symptoms, such as shortness of breath, neck stiffness or coughing bloody phlegm.   Persistent symptoms that last more than a few days or symptoms that worsen after initial improvement suggest that the infection may be bacterial.  If in doubt about what has caused your infection or if you think that an antibiotic may be needed, by all means see a health care professional.  But don’t just ask for antibiotics—find out from your doctor the most likely cause for the infection and learn about the most appropriate treatment.

In a nutshell, doctors should only prescribe antibiotics when a bacterial (rather than viral) infection is suspected, and should choose the specific antibiotic that is most likely to be effective for the bacteria responsible for that infection.  Colds, flu and most cases of sore throat or runny nose do not need antibiotics. They are caused by viruses and in most instances the body is able to combat the infection on its own.

Similar to other challenges in life such as losing weight or becoming physically fit, there is no magic pill that provides a shortcut to recovery from a cold.  It never hurts, though, to live a healthy lifestyle and have a strong immune system!