Americans born between 1945 and 1965 are popularly referred to as “baby boomers”. This population of people, now in their 50’s and 60’s, were part of an explosion of babies born following World War II. Recently, the US Preventive Services Task Force (USPSTF) issued a recommendation that in addition to screening individuals who are at high risk for hepatitis C, all adults born between 1945 and 1965 should receive a one-time screen for the hepatitis C virus (HCV). In May of 2012, a similar recommendation had been issued by the Centers for Disease Control. What exactly is Hepatitis C and why the concern regarding baby boomers? 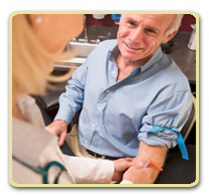 What is Hepatitis C? Hepatitis C is an infection caused by the hepatitis C virus (HCV) that attacks the liver and can lead to the development of cirrhosis and liver failure. The USPSTF panel has noted that “HCV is the most common chronic bloodborne pathogen in the United States and a leading cause of complications from chronic liver disease.”

How does someone contract Hepatitis C? Hepatitis C is transmitted via blood that is contaminated with the hepatitis C virus. The most important risk factor for HCV infection is past or current injection drug use. Other people at risk include health care workers who have been exposed to blood or accidental needle sticks, sexual partners of anyone with a HCV infection, and someone who received a transfusion or blood products prior to the time that reliable testing for HCV was performed.

Wouldn’t someone with HCV have symptoms? During its earliest stages, most people with HCV infection have no symptoms. When symptoms are present, they are usually mild, consisting of yellowing of the whites of the eyes (jaundice), fatigue, nausea, and muscle aches. Until the point that liver cells are damaged and replaced by scar tissue (cirrhosis) even people with long-term HCV have very few symptoms. Severe liver damage typically occurs after carrying the virus for 20 to 30 years. With the development of cirrhosis, a number of symptoms can occur including bleeding easily, jaundice, fluid accumulation in the abdomen, loss of appetite, swelling in the legs, and weight loss.

Why are baby boomers at particular risk? Current statistics indicate that about three fourths of Americans living with HCV infection were born between 1945 and 1965. In their recent report, the USPSTF noted that “persons born between 1945 and 1965 are more likely to be diagnosed with HCV infection, possibly because they received blood transfusions before the introduction of screening in 1992 or have a history of other risk factors for exposure decades earlier.”

What are some of the long term complications of HCV infection? HCV-related liver failure is the most common reason for liver transplants among adults in the U.S. Additionally, chronic HCV infection imposes a higher risk for the development of liver cancer.

Can Hepatitis C be treated? Not everyone with a HCV infection requires treatment. When liver functions are normal and the disease appears to be benign, monitoring for liver problems may be all that is necessary. When liver function testing indicates active disease and liver biopsy confirms the presence of chronic hepatitis, standard treatment involves a combination of an anti-viral medication (ribavirin) and pegylated interferon (alfa-2a or alfa-2b). Interferons are proteins released by the body, usually in response to the entry of a virus that are capable of inhibiting virus replication.

How do you screen for Hepatitis C? Initial screening is done via a simple blood test to look for the presence of antibodies against HCV (anti–HCV antibody). When this test is positive, the diagnosis is confirmed by a second blood test that uses a technique called polymerase chain reaction.

What are the benefits of detecting HCV if someone does not have symptoms? Since HCV can remain asymptomatic for decades, it has been estimated that as many as 2 million baby boomers are unaware that they have a chronic HCV infection. The USPSTF has acknowledged that “there is no direct evidence of the benefit of screening for HCV infection in asymptomatic adults in reducing morbidity or mortality.” Nevertheless, they believe that screening is justified since more effective treatment regimens are currently available that can improve the long-term outlook for those who have a chronic infection.