A review of interventions to help with smoking cessation, recently published in the Journal of Family Practice offers encouraging news for smokers who are trying to quit. The report relied heavily on the work of the Cochrane Collaboration, a highly respected group of scientists who pool the results of the best-conducted studies on a particular subject in order to draw the most valid conclusions.

Of the interventions that don’t involve taking medications, the ones that w 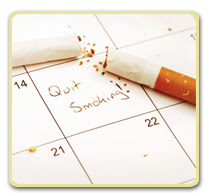 ere found to be effective include 1) brief physician advice in the office, 2) telephone methods such as the use of quit lines, and 3) group and individual counseling. Many smokers, however, require more than advice or counseling. For these people, several medication-based interventions, which will be discussed in detail, were found to be effective.

Bupropion (Zyban) is a prescription medication that is marketed to help with smoking abstinence. It is the same medication as the antidepressant, Wellbutrin. The way that it helps smokers to abstain is poorly understood. Nevertheless, clinical trials showed that smokers were almost twice as likely to quit when taking bupropion as compared to taking a placebo, providing strong evidence for its effectiveness.

Varenicline (Chantix) is a prescription medication that acts on the same sites in the brain, and provides some of the same effects, as nicotine. It helps to ease withdrawal symptoms and if users resume smoking, blocks the effects of nicotine from cigarettes. Varenicline was found to be slightly better than bupropion in assisting with smoking cessation, but not as effective as nicotine replacement therapy. The FDA has required “black box” warnings on the prescribing information for both bupropion and varenicline due to reports of serious neuropsychiatric symptoms including changes in behavior, hostility, agitation, depressed mood, and suicidal thoughts and behavior.

Nortripyline is an older antidepressant medication of the tricyclic class. Taking nortripyline was found to be equally effective as bupropion and to nicotine replacement therapy in producing long-term smoking abstinence. While the mode of action is not clearly understood, it appears to work independently of its antidepressant effect. The newer antidepressants of the selective serotonin reuptake inhibitor (SSRI) class including fluoxetine (Prozac), paroxetine (Paxil), sertraline (Zoloft), and venlafaxine (Effexor) were not found to be effective for smoking cessation.

Clonidine (Catapres) is a medication that is most commonly prescribed for high blood pressure. A small number of studies have shown that taking clonidine is slightly more effective than taking a placebo in assisting with smoking cessation. Its usefulness, however, appears to be limited due to its side effects that include dry mouth and sedation. The use of clonidine should be considered in those people who were not helped by other methods, such as nicotine replacement therapy or antidepressants.