What is tinnitus? Tinnitus, or ringing in the ears, is a symptom that affects around 30 million people in the U.S. Of these, 1 in 5 report that their tinnitus is severe enough to be considered disabling. People with severe cases of tinnitus may find it difficult to hear, work, or even sleep. Tinnitus is not always characterized as ringing. Some people describe it as roaring, clicking, hissing or buzzing.

What causes tinnitus? Tinnitus is a symptom, not a disease. 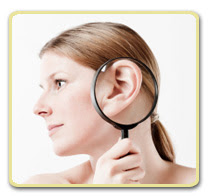 Some of the underlying problems that may be responsible include hearing loss, exposure to loud noises, and a side effect of medications. It may be surprising to some to learn that aspirin is one of the medicines most likely to cause tinnitus. Other medications that can be responsible include certain antibiotics (e.g. chloramphenicol, erythromycin, gentamicin, others), quinine and diuretics (e.g. furosemide). Tinnitus can also be a symptom of other health problems, such as allergies, anemia, arterioslcerosis (hardening of the arteries), high blood pressure, tumors (e.g. acoustic neuroma) and heart problems. In many cases, however, a specific cause is never found.

What should I do about my tinnitus? Those with the recent onset of tinnitus should undergo medical evaluation. If a specific underlying cause can be determined, it may be treatable. For example, if a minor cause such as wax accumulation in the ear canal is found, treatment can be curative.

Can the ringing itself be stopped? When no specific cause for tinnitus is found, treatment is aimed at managing the symptoms. Most individuals with tinnitus will respond favorably to one or more of the following treatments:

Self-care measures – Factors that can make tinnitus worse and should be avoided include smoking, alcohol, and caffeine. Those who are regularly exposed to loud noise at home or at work should wear earplugs or special earmuffs to protect their hearing. Since high blood pressure can cause tinnitus it is important to have this checked and treated if it is found to be too high.

Hearing aids – with tinnitus have some degree of hearing loss. For example, age-related hearing loss (presbycusis), is commonly associated with tinnitus. Use of a hearing aid will make it easier to hear as well as making the tinnitus less noticeable.

Sound therapy utilizes the principle of distraction to mask tinnitus with a less annoying sound. Electronic devices, such as white noise machines, produce sounds similar to that of radio static. This distracts the individual from hearing the noises produced by their tinnitus. Some of these devices are small enough to fit into the ear. If the tinnitus is mild, a fan or soft music may be enough to accomplish the same thing as a white noise machine.

Medications – No specific medication consistently helps to treat tinnitus. The ones that have helped in certain instances include antihistamines, antidepressants (e.g. amitriptyline and nortriptyline), and the anti-anxiety medication, alprozolam (Xanax, Niravam). Acamprosate (Campral), a drug used to treat alcoholism has shown promise as a treatment for tinnitus, but has not yet been approved for this use by the U.S. Federal Drug Administration.

What about severe or disabling tinnitus? If the above measures are unsuccessful, other treatments can be considered. Cognitive Therapy, originally developed as a treatment for depression and anxiety, uses relaxation and thought remodeling to improve the patient’s attitude towards tinnitus. Cognitive Therapy does not decrease the perceived loudness of tinnitus, but has a positive effect on the way in which people cope with the problem. Tinnitus Retraining Therapy is a form of educational counseling that helps the sufferer to “habituate” or filter out the tinnitus so that it does not reach conscious perception. Transcranial Magnetic Stimulation (rTMS), a treatment occasionally used in treating depression, has shown some promise in treating tinnitus, and is currently undergoing additional clinical trials.

If you have any questions about tinnitus, please log into your account and send us your question. We are here to help.