egular readers of eDoc’s Health Tips have learned that sensible eating habits and maintenance of ideal weight are important keys to staying healthy. There are instances, however, that in spite of best intentions, weight loss becomes an unachievable goal. In many people who have had no success with conventional methods of losing weight, gastric bypass surgery often becomes a consideration. 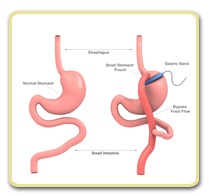 Health problems, such as hypertension, diabetes, and high cholesterol often accompany being overweight, particularly in the severely obese. These are major contributors to the development of coronary heart disease and may lead to premature death. Research has found that among severely obese patients, gastric bypass surgery can provide lasting improvement in weight, send Type 2 diabetes into remission, and reduce overall cardiovascular disease risk.

The Journal of the American Medical Association recently published a study that monitored weight and other health parameters of severely obese patients (body mass index greater than 45) who underwent gastric bypass. These patients were followed for an average of 6 years after surgery. Along with the surgical patients, other individuals with similar pre-operative weights were followed. In this “control” group, no organized effort was made to help them lose weight. They were, however, free to pursue weight loss methods on their own. The type of surgery performed in the study group was known as the Roux-en-Y procedure, the most common type of gastric bypass surgery.

From this study, the major benefits noted following gastric bypass surgery were:

Remission of diabetes – Type 2 Diabetes is very common in the obese. It is well known that weight reduction can improve blood sugar control, or even cause the diabetes to go into remission. Of the diabetics treated with gastric bypass surgery, there was a 62% remission in diabetes at the end of 6 years. Additionally, over that same 6 year period, there was a much lower occurrence of new cases of diabetes in the non-diabetic subjects who underwent surgery as compare to controls.

Of note is that over the 6 year period of follow-up there was no significant difference in death rate between the surgical patients and controls. This could be attributed to the relatively short period of time that these patients were followed. Additionally, there were 7 deaths attributed to suicide or “poisoning” in the study with 6 of these occurring in the surgical group. These unexpected deaths, along with a number of complications and hospitalizations in the surgical group, points out that gastric bypass surgery is not without risks and should be considered only after more conventional methods of achieving weight loss have failed. Prior to undergoing gastric bypass, careful evaluation of the physical and psychological make-up of the surgical candidate is necessary.