Illness from influenza has already been confirmed in 48 states. This is the earliest that the nation has recorded this much activity in a decade. Unusually intense flu activity has been reported in a number of southern states including Alabama, Louisiana, Mississippi, Tennessee and Texas. The type of flu being detected this year is caused by H3N2 viruses which are typically associated with more severe illness and higher-than-usual number of flu-related deaths. 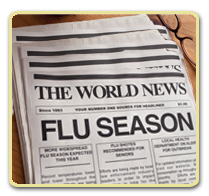 Influenza can be particularly hard on certain populations. Young children, older adults, pregnant women and people with chronic illnesses, such as asthma, diabetes and heart disease, are more likely to suffer complications from the flu and require hospitalization. But even healthy people who experience an uncomplicated case of the flu know what a miserable experience it can be.

The flu vaccine is the best way to protect against this potentially serious disease. The Centers for Disease Control (CDC) recommends that everyone 6 months of age and older receive the flu vaccine. Flu vaccines cause antibodies to develop in the body about two weeks after vaccination. These antibodies provide protection against infection with the viruses that are in the vaccine.

Delivery methods for the flu vaccine include the “flu shot” and a nasal spray vaccine. A new type of injection involving the use of a very small needle (intradermal) has been approved for use in people 18 to 64 years of age. The nasal spray is an option for healthy, non-pregnant people 2-49 years of age. Receiving your flu vaccine is becoming more and more convenient. In addition to the doctor’s office, flu vaccination may be available at health departments, pharmacies, retail stores as well as schools and at the workplace.

It is estimated that 112 million Americans, representing 37% of the population, have already received their flu vaccine. While this is encouraging, it’s important to realize that flu season has just started and does not usually peak until February. In past years, vaccination rates for influenza have been noted to taper off after November. National Influenza Vaccination Week (NIVW), this year scheduled for December 2-8, was established by the CDC to encourage people to become immunized during the holiday season. With already higher-than-average flu activity noted and anticipated gatherings of family and friends during the holidays, use this opportunity to protect yourself and your loved ones against influenza.