An estimated 4.7 million dog bites and 400,000 cat bites occur annually in the United States. Although it is commonly thought that a dog’s mouth is cleaner than a human’s and less likely to cause infection, dogs, cats, as well as humans all harbor bacteria that can cause infection. This is one of the main reasons why treatment of a dog or cat bite (or human for that matter) should be dealt with promptly.

Which is worse, a dog or a cat bite? The types of injuries inflicted by dogs and cats differ considerably. Dogs, with stronger jaws and relatively dull teeth, create shallower wounds or 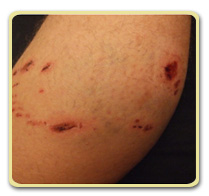 crushing-type injuries. Cats, on the other hand, have sharp teeth that produce puncture wounds. Bacteria from the cat’s mouth may be deposited in the bottom of these punctures that can be difficult to remove with washing. This sets the stage for an infection, potentially affecting deeper structures such as bones, tendons, or joints. While both dogs and cats can inflict serious injuries, cat bites are much more susceptible to becoming infected.

What should one do if bitten by a dog or cat? For most dog or cat bites, taking the following steps will help to ensure an uneventful outcome:

What kinds of infections are caused by dog or cat bites? Pasteurella bacteria, present in the mouths of dogs and cats, are responsible for most bite-associated infections. Typically, these infections develop within a day or two after the bite and involve the skin and subcutaneous tissue in the area of the bite. Other secondary infections of dog and cat bites are due to Strep or Staph bacteria. Bites to the hand are particularly bothersome since there is less blood circulation in these areas making it harder for the body to fight infection. The most serious bite-associated infection is rabies. Rabies is a viral infection that can be transmitted by an infected animal through bites or scratches. Fortunately, rabies in humans has become rare with an average of only five cases being reported annually. If suspected, injections of the rabies vaccine are given as soon as possible following the bite to prevent the disease from developing. 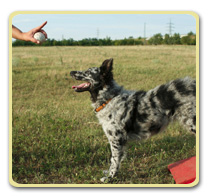 Can the risk of dogs biting humans be reduced? The American Veterinary Medical Association offers the following suggestions to help dog owners minimize the risk of their dog biting someone: