Finger and toenails—What can they tell us about our health?

While changes in the normal configuration of nails usually indicate a problem affecting the nail itself, certain changes may also provide clues to an underlying medical condition.  Brittle nails, nails containing “pits” or small depressions, nails that are discolored yellow or green, or dark lines beneath the nail are examples of the changes that could point to a medical problem.  Let’s look at some of the most common nail abnormalities and learn when it is advisable to seek medical attention should they develop. 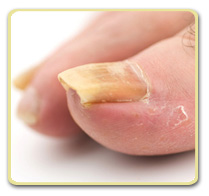 Thickened, discolored, crumbling nails:  Perhaps the most common nail abnormality occurs as a result of a fungal infection, also known as onychomycosis.  Fungi commonly reside in warm, moist environments, such as swimming pools and showers.  Infections develop when the fungus enters the nail through a small separation between the nail and nail bed.  Toenail involvement is more common than fingernail infections because fungi thrive in the moist, warm environment produced when wearing shoes.  These infections usually begin as a white or yellow spot under the tip of the fingernail or toenail.  As the fungus spreads deeper into the nail, thickening, discoloration and crumbing of the nail edge occurs.  Nail fungus can be difficult to treat and responds poorly to over-the-counter medications. Frequently, it is necessary to take a prescription oral antifungal medication for several weeks in order to effectively treat nail fungus.  Measures to prevent the occurrence of a nail fungus include not going barefoot in public showers, thoroughly drying your hands and feet (particularly between toes) after bathing, wearing synthetic socks to “wick” away moisture from the skin, and use of an antifungal spray or powder.

Green nail discoloration:  An infection under the nail caused by a particular type of bacteria known as “Pseudomonas” is associated with a very characteristic green nail discoloration.  Manicurists sometimes refer to this nail condition as “the greenies”.  Pseudomonas nail infections most commonly affect those whose hands are often in water, such as dishwashers. Initial treatment involves trimming back the nail and soaking in an acetic acid or antibiotic solution.  In some cases, particularly when the skin around the nail is also infected, treatment with oral antibiotics may be required.

Pitting and rippling of nails:  These are the typical changes noted when the nail abnormality is caused by psoriasis.  Psoriasis is a skin disease of unknown cause that causes itchy or sore patches of thick, red skin with silvery scales.  Up to 10% of those who develop psoriasis will have nail abnormalities as the initial finding and most of these go on to develop the characteristic skin rash also.

White spots beneath nails:  Also called “leukonychia”, white dots or lines beneath the nails are usually related to trauma, such as banging the end of finger. Since the injury affects the nail matrix located at base of the nail, the white spots are usually seen only after the nail begins to “grow out”.  With time and continued growth of the nail, the spots eventually disappear. 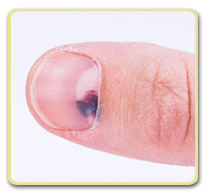 Red or black nail discoloration:  A hematoma, or collection of blood beneath the nail, is the most common reason for red or black nail discoloration.  Bleeding beneath the nail is typically related to trauma, such as hitting a finger with a hammer.  As with white spots due to trauma, with time the discolored area “grows out” and the nail returns to normal.  A black spot under the nail with no associated trauma, on the other hand, could indicate a much more serious problem, such as a melanoma tumor.  Dark nail pigmentation that develops without an injury should be evaluated promptly by a physician.

Brittle nails:  Many people believe that brittle nails are the result of a protein deficiency that can be addressed by consuming gelatin. This belief appears to have stemmed from a marking effort in the 1890s by the Knox family who developed a method of processing the hooves and hides of horses and cows into a powdered gelatin product.  They contended that eating gelatin would provide the protein necessary to develop strong nails.  We now know that protein deficiency has less to do with the development of brittle nails than does environmental dryness, heredity, and aging.  Other causes for brittle nails include low levels of iron in the body and an underproduction of thyroid hormone (hypothyroidism).  Laboratory testing may be necessary to confirm these diagnoses. The most important self-care measures for brittle nails are to limit the amount of exposure to water and soap and to apply moisturizers to the nails.