Feeling “Under the Weather”? How atmospheric conditions affect our health.

Bioclimatology is the study of climate in relation to living organisms, in particular the way in which weather conditions can affect human health.  While this would seem to be a relatively new science stemming from concern regarding environmental deterioration, the relationship between atmospheric conditions and health was touched on over 2,000 years ago by Hippocrates in his treatise on “Air, Water, and Places”.   Since then, weather has been shown to influence the course of a number of medical conditions including arthritis, the initiation of childbirth, and even heart attack. 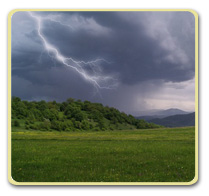 Arthritis—Most people have heard of the association between changes in the weather, particularly the advancing of a low pressure system, and worsening of arthritis. An example is when someone with arthritis predicts that rain is coming because their knees are aching. The theory (although never proven) is that arthritic joints swell as the barometric pressure drops. This swelling irritates the nerves around the joints causing pain and stiffness.  This phenomenon, however, does not appear to affect every person with arthritis, nor is there evidence that this weather-related worsening brings about permanent joint damage. While moving to a warmer or more stable climate has been proposed as a remedy for this problem, it has not consistently been shown to provide a long-term benefit.   If weather predictably worsens arthritis, affected individuals may need to adjust their medications when a low-pressure system is approaching.  Light exercise to warm up joints and wearing appropriate clothing prior to going outside are other ways of addressing adverse weather factors.

Migraine Headache—Some of the atmospheric triggers for the development of migraines include bright sunlight, extremes in heart or cold, dry air, and barometric changes.  Drops in barometric pressure caused by traveling to a higher altitude, the onset of a low pressure weather system, and air travel seem to be particularly common triggers.  Many migraine sufferers are able to identify the specific weather trigger by keeping a careful headache diary, making note of each migraine and what could have caused it.  If traveling to a higher altitude, gradual acclimatization may help to prevent the headache.  If the trigger cannot be avoided, a medication used to prevent or abort attacks should be used at the first sign of a migraine.

Respiratory Disease—Respiratory conditions, such as asthma and chronic obstructive lung disease (COPD), can be affected by weather changes also.  COPD, formerly known as emphysema, is a progressive, life-long condition in which the flow of air from the lungs is partially blocked.  While the primary cause and irritant in COPD is cigarette smoking, certain weather factors including excessive heat or cold, high humidity, and air pollution can exacerbate symptoms.  Asthma is also a long-term lung disease that results from inflammation and narrowing of the airways. Cold air, allergens, and air pollutants commonly make asthma worse.  Thunderstorms can be a real problem in someone with allergen-sensitive asthma since the wind in these storms has been noted to stir up pollen grains at ground level and into the airways.  One specific atmospheric condition that can affect both COPD and asthma is called a “temperature inversion”. This occurs when the air near the surface of the earth is cooler than the air above.  This cooler air is heavier and does not move up to mix with the warmer air above.  Pollutants, such as ozone, dust, and smoke released near the surface will get trapped and build up in the cooler layer of air near the surface.  When the Air Quality Index reaches the “Red” (unhealthy) level, people with COPD or asthma are better off staying indoors in conditioned air and avoiding outdoor exertion. Keeping the air as pure as possible with use of a HEPA air filter and changing furnace filters regularly can help also. In cold weather the use of a scarf over the mouth can help to warm inhaled air when going outside.

Heart Disease—Heart attacks occur when blood flow through narrowed coronary arteries becomes blocked, cutting off the supply of oxygen to the heart.  Physical exertion as well as cold environmental temperatures increases the demand for oxygen by the heart.  The combination of the two, as when someone with coronary heart disease is shoveling snow in the winter, can be a formula for the development of a heart attack. In addition to causing exertional heat stroke, the stress imposed by hot weather can be dangerous in someone with a heart condition.  This is particularly true in athletes with underlying structural heart abnormalities and in the elderly. Coronary heart disease patients on medications such as beta blockers and diuretics need to be especially careful in hot weather since these medicines can affect the body’s ability to cool itself.

Mark Twain has been attributed with the quote, “Everybody talks about the weather, but nobody does anything about it”.  While it is true that we have very little control over the weather, those with the medical conditions discussed would be wise to pay attention to the effect that weather has on their disease and learn to adjust their medications or lifestyle accordingly.