By edocamericaJune 2, 2011Health Tips
Endometriosis is a condition affecting women in which cells similar to those that form the lining of the uterus (endometrium) grow outside of the uterus. Common locations for the abnormal growth of endometrial cells include the ovaries, Fallopian tubes, intestines, and the lining of the pelvic cavity. Unlike the normal endometrial cells lining the uterus that are shed each month during menstruation, endometriosis cells remain attached to the tissues to which they have spread. With each menstrual cycle, these cells can thicken, break down, and can even bleed. While not always symptomatic, endometriosis frequently causes pelvic pain (often associated with periods), irregular bleeding, and scarring (adhesions) on the ovaries, Fallopian tubes, and bowel. 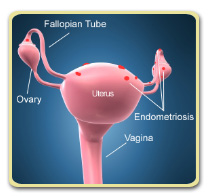 How does endometriosis occur? Although the exact cause is uncertain, there are several theories as to how endometriosis develops. The most commonly held belief is that endometriosis occurs because of “retrograde menstruation”. This means that instead of the endometrial tissue exiting the uterus through the cervix during a menstrual period, some of it “backs up” through the Fallopian tubes into the pelvic cavity. If this tissue attaches and grows on nearby structures, endometriosis occurs. Endometriosis also appears to be related to having higher levels of estrogen, since it is most common in women during their childbearing years (teens to late 30s).

Who is most likely to develop endometriosis? Risk factors for the development of endometriosis include: 1) never having had a child, 2) having a mother or sister with endometriosis, 3) shorter menstrual cycles with bleeding lasting more than 7 days, and 4) starting menstruation at an early age.

How is endometriosis diagnosed? The three primary measures used in diagnosing endometriosis are: 1) the pelvic examination, 2) ultrasound, and 3) laparoscopy. Although both the pelvic examination and transvaginal ultrasound can provide clues to the presence of endometriosis, the best way to confirm the diagnosis is by direct visualization with a surgical procedure known as laparoscopy. Pelvic laparoscopy is sometimes called “band-aid” surgery because only small incisions need to be made to accommodate the small surgical instruments that are used to view the abdominal contents and perform the surgery.