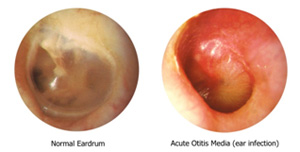 Causes of earache: The pain of earache results from inflammation and swelling of the structures that make up the ear, including the external ear canal, the tympanic membrane (ear drum), and the middle ear. One of the most common causes for mild earache is a buildup of fluid in the middle ear in association with a viral upper respiratory tract infection, such as the common cold. Even if the trapped fluid behind the eardrum is not infected, the pressure causes it to bulge and throb. As with other manifestations of a cold, mucus in the middle ear and associated earache usually clears on its own. On occasion, however, mucus in the middle ear along with blockage of the tube that drains the middle ear (Eustachian tube) sets the stage for the development of a bacterial infection. This is called acute otitis media and is the most common cause for an earache that requires antibiotics.

Another fairly common cause for earache, particularly in the summer when swimming is a common pastime, is otitis externa, or “swimmer’s ear”. Bacteria that cause swimmer’s ear are able to grow and multiply easily in the warm moist environment of the external ear canal. Like bacterial otitis media, swimmer’s ear, is treated with antibiotics, although they are usually delivered topically (ear drops) rather than by mouth.

Inflammation of the ear drum, known as myringitis, may be due to localized infection or trauma. Local trauma to the ear drum can occur from damage by a foreign object like a Q-tip or paper clip used to remove wax or an insect. The ear drum can also be ruptured, a condition known as “barotrauma”, from changes in pressure due to scuba diving, flying in an airplane, or due to an explosion or very loud noise. A less common cause for earache is “referred pain” from some other condition, such as tooth decay or temporomandibular joint dysfunction.

Distinguishing minor earaches from ear infections: A question that arises commonly, particularly in children, is how to tell an earache, such as one caused by a viral upper respiratory tract infection, from the more serious bacterial middle ear infection. Here are a few clinical clues to help tell these two apart:

When one or more of these features are present, it is important to see a doctor for evaluation. 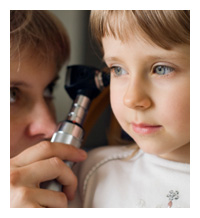 Diagnosing an ear infection: When an ear infection is suspected, the doctor examines the ear with an instrument called an otoscope. Through the otoscope, the ear canal and ear drum can be inspected. If an ear infection is present, the eardrum may be red or bulging. The doctor can also check for the presence of fluid in the middle ear by blowing a small amount of air against the ear drum and watching for movement. If fluid is present, the eardrum will not move back and forth. Another diagnostic tool for evaluating eardrum movement is called tympanometry.

Self-care of earaches: Although there are numerous “home remedies” described for treating simple earache, such as placing slightly warmed olive oil in the ear canal, the safest treatment is to apply a warm, moist cloth over the affected ear and take a mild analgesic such as acetaminophen or ibuprofen. In certain cases, physicians may prescribe ear drops containing benzocaine (e.g. Auralgan) which works by numbing the sensory nerves of the ear drum.

If you have any questions regarding earaches or ear infections, please log into your account and send us your question. We are glad to help.