What is the difference in Type 1 and Type 2 Diabetes?

Most people are aware that diabetes is a disease characterized by having high blood glucose (sugar).  Indeed, an antiquated term for diabetes was “sugar diabetes”.  But under the umbrella of the disease that doctors refer to as “diabetes mellitus” are really two entities, Type 1 and Type 2 diabetes. 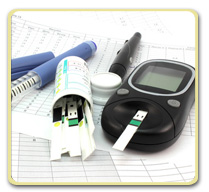 Insulin, the common denominator: Insulin, a hormone made in the pancreas, is involved in the development of both Type 1 and Type 2 diabetes. Insulin allows the cells in the muscles, fat and liver to absorb glucose from carbohydrates that we eat to be used for energy production.  The way that insulin affects the development of the two types of diabetes, however, is markedly different. Type 1 diabetes is considered to be an autoimmune disease in which the body’s immune system attacks the cells in the pancreas responsible for producing insulin. Eventually, insulin production ceases and glucose is unable to enter the cells.  In Type 2 diabetes, insulin is still being produced but the body is unable to use this insulin effectively. This is called “insulin resistance.” Initially, the body compensates for this by increasing insulin production but over time not enough can be made. In either case, the body is unable to convert sugar and other starches into energy and blood glucose rises, sometimes to dangerous levels.

How Type 1 and Type 2 diabetes are similar:

How Type 1 and Type 2 diabetes are different:

With one in three Americans having pre-diabetes, but most being unaware of their condition, the CDC has initiated a campaign to identify those who are at risk.  The Prevent Diabetes STAT program starts with a prediabetes screening test that can be found here.  Anyone with a risk score of 5 or above is encouraged to see their doctor to determine if additional testing is necessary.  Additionally, The United States Preventive Services Task Force (USPSTF) recommends screening for abnormal blood glucose in adults aged 40 to 70 years who are overweight or obese.

Sources for article:
Types of Diabetes from the National Institutes of Health
Diabetes Basics from the American Diabetes Association
Prevent Diabetes STAT from the Centers for Disease Control

If you have any questions about diabetes, please log into your account and send
us your question. We are here to help.