Of course being hungry is not a disease, but overeating and excessive weight is clearly a risk to health. Controlling one’s appetite and managing food intake seems to be particularly difficult during the holiday season. According to the National Institutes of Health, Americans gain an average of one pound during this time. While this may not seem like much, the problem is that people typically do not lose that additional weight. Over time, the additional weight accumulates and can lead to becoming overweight or obese. Fortunately, there are ways of combating “hungeritis” and enjoying a healthier Thanksgiving. 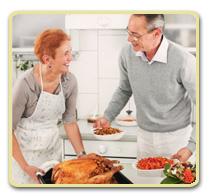 Celebrate the season, not the food. Rather than a time to give thanks for the blessing in our lives, it seems that Thanksgiving has become a holiday that is centered on eating. This year, focus more on friends, family, and making new acquaintances. See to it that the holiday meal remains secondary to enjoying each other’s company.

Practice healthy meal management. There are a number of tried and true “tricks” used to decrease the chances of overeating. Taking small bites and eating slowly will help give the brain the 20 minutes or so to get the message from your stomach that you are getting full. Using a smaller plate will help with portion control, but be careful with seconds! Eat only until satisfied and when appropriate, leave the table to avoid habitual eating. Try drinking 8 to 12 ounces of water before the meal to increase the sensation of satiety.

Burn some additional calories. If you are currently exercising, consider increasing the duration of your workouts to compensate for the inevitable increase in calories during the holiday season. Following meal time, consider organizing an after-meal activity, such as a group walk. Exercise is also a great way to help relieve holiday stress.

Go easy on the alcohol. Not only can alcohol stimulate appetite, many alcoholic beverages consumed during the holidays are loaded with calories. A cup of eggnog, for example, has approximately 350 calories, even before the liquor of choice is added. While some “light” beers have as few as 100 calories per 12 ounces, “craft” beers with their higher alcohol content can reach 350 calories. Mulled cider or lowfat eggnog are good, lower-calorie alternatives.

Make healthy substitutions. When making stuffing, use less bread and add more onions, celery, or other vegetables. Substitute low fat broth for “drippings” traditionally used in making gravy. Set aside the skin from the turkey that is loaded with saturated fat and calories. Use skim milk, fat free sour cream or yogurt for making mashed potatoes.

Don’t go to a holiday party on an empty stomach! Skipping a meal usually results in consuming far more calories than one would if they had eaten something beforehand.

It’s OK to splurge a bit during holiday meals, but choose your extra calories wisely and try to burn a few of them afterwards with exercise. White turkey meat, vegetables without heavy sauces, mashed potatoes with defatted gravy, and pumpkin pie are usually the safest choices in order to avoid excess calories. This Thanksgiving, try to make sure that the turkey, rather than you, gets stuffed!