Search the National Library of Medicine’s database, PubMed, and you will find hundreds of studies that have examined coffee’s impact on health.  Not only does this research overwhelmingly suggest that moderate coffee consumption doesn’t cause harm, it appears that drinking coffee may even offer some health benefits.  Moderate coffee consumption, defined as three or four cups a day, provides around 300 to 500 milligrams of caffeine. While it’s a stretch to consider coffee as a “health food”, the following health benefits have been found to be associated with coffee consumption: 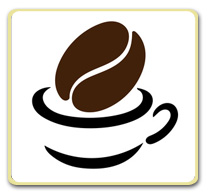 Additionally, there is some evidence that coffee may benefit asthma, improve memory, decrease fatigue, improve mental functioning, and stop a headache, as well as improve endurance performance in long-duration physical activities.

Now for the bad news—for some, drinking coffee can cause a number of untoward effects.  Caffeine, coffee’s active ingredient, is a mildly addictive stimulant which can make a person jittery and uncomfortable.  Certain heart conditions are affected by caffeine, causing rapid or irregular heart rhythms. Coffee drinking is associated with small increases in blood pressure, and, in some people, may play a role in the development of hypertension.  Pregnant women are advised to limit coffee consumption because of the potential for spontaneous abortion or impaired fetal growth.  Furthermore, caffeine abuse, particularly in association with the so-called “energy drinks,” commonly seen at the neighborhood convenience store, is becoming an emerging problem.  While a cup of regular coffee contains approximately 100 mg of caffeine, a 16 ounce can of Original Rockstar contains 160 milligrams and Rockstar Punched energy drink contains 360 mg of caffeine per 24 ounce can. Also one needs to consider the “hidden” calories that can be found in some coffee drinks. A cup of black coffee contains only around 2 calories, but a small McDonald’s Chocolate Chip Frappe is reported to contain a whopping 500 calories!

Perhaps the inscription “Nothing in Excess” at the Oracle’s temple at Delphi was referring to coffee consumption.  Maintaining a moderate level of coffee consumption of 3 to 4 cups per day, however, appears to be safe for most and may even provide some health benefits.