Sponsored by the League of American Bicyclists, May is National Bike Month and is an opportunity to celebrate the many reasons that people choose to ride. For some, bicycles represent their primary means of transportation. Many people ride bikes as

a means to health and fitness. Others yet find pleasure and perspective from a bicycle saddle as they ride along a bike trail. Of the many reasons for bicycling, I find that three in particular stand out—health benefits, economic savings, and environmental advantages.

Health Benefits: The health benefits of regular cycling include: 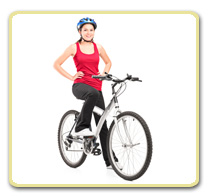 Environmental Advantages: Motor vehicles consume the majority of oil used in the U.S. Along with fuel consumption comes the serious problems of carbon dioxide accumulation in the atmosphere and the potential for permanent climate change. It is sobering to realize that for a 10 mile round trip commute in a mid-size care averaging 20 mile per gallon, 1.3 tons of carbon dioxide are released into the environment over the course of a year. The potential for improvements in air quality with widespread bicycling commuting is dramatic. The same can be said of bicycling for exercise instead of the use of fossil fuel powered vehicles. 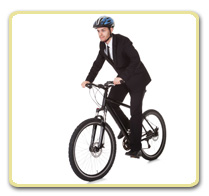 This not only provides health benefits to the rider but is better for the environment as well. For those concerned about the effects of breathing exhaust while riding a bicycle, a study performed in the Netherlands considered the risks and benefits of bicycling rather than driving for short trips on a daily basis. They estimated that the benefits of increased physical activity from bicycling (3 to 14 months gained) outweigh the effects of increased inhaled air pollution (0.8 to 40 days lost) and increased traffic accidents (5 to 9 days lost).

Economic Savings: With over half of the working population of the U.S. living within 5 miles of their workplace, bicycling becomes a realistic way of getting to work. In fact, it has been reported that from 2000 to 2011, the number of bicycle commuters in the U.S. grew by more than 47 percent. The League of American Bicyclists estimated that in 2012, bicycle commuters in the U.S. saved more than $4.6 billion over their car driving counterparts. Savings for the bicycle commuter comes from a variety of sources including parking fees, fuel costs, car maintenance expenses, and public transportation fares. Businesses benefit also in that cyclists take fewer days off work for illness than non-cyclists. Add to that the savings from treatment of chronic illnesses that bicycling could help prevent, and the economic benefits of bicycling are astonishing.